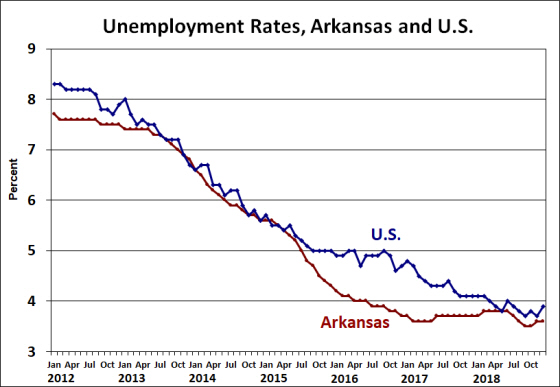 For the third consecutive month, the underlying components of the unemployment rate showed an increase in both the number of employed and the number of unemployed, implying an expanding labor force.  For the period September through December, the household survey shows an employment increase of 2,843 and an unemployment increase of 1,881.  Consequently, the labor force participation rate increased in December from 57.4% to 57.5%.  As is often the case, this increase in labor force participation is mathematically associated with a higher unemployment rate (manifested in the November uptick), but is not an unambiguously negative development. 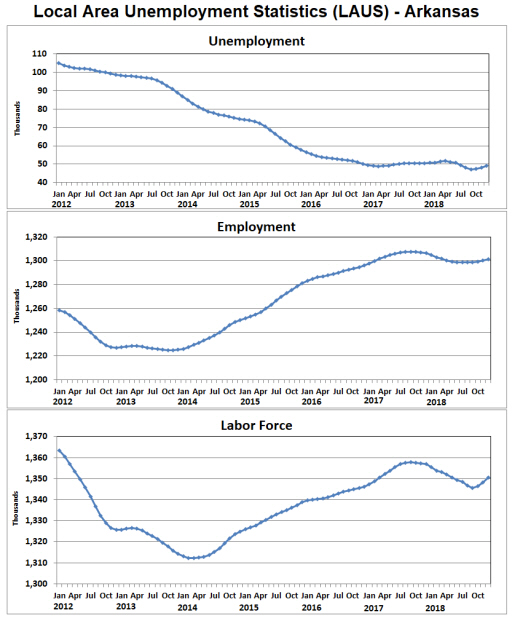 Payroll Survey
Nonfarm payroll employment increased by 1,800 in December (seasonally adjusted), and the figure for November was also revised upward by 200 jobs compared to last month’s report.  As a result, Arkansas payroll employment ended the year with 17,100 more jobs than at the end of 2017 — a growth rate of 1.4%.  Over the same period, U.S. employment growth expanded by 1.8%. 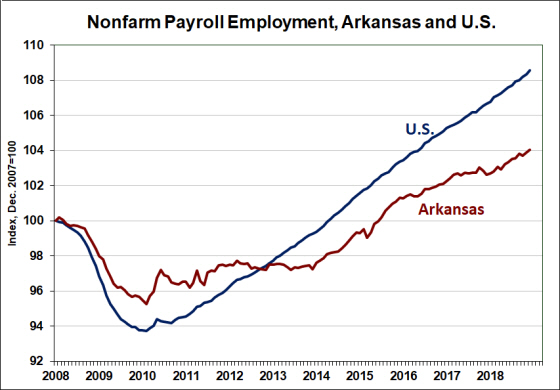 Throughout much of the current economic expansion, job growth has been almost entirely concentrated in service-providing sectors.  In recent months, however, goods-producing sectors have been making a comeback.  Manufacturing ended the year with an increase of 3,800 jobs (+2.4%), with gains in both durable and nondurable-goods manufacturing.  With the construction sector also adding 1,900 jobs, good-producing sectors accounted for over 5% of the state’s job growth in 2018.  In December alone, good producing sectors accounted for over 90% of total employment growth, with service-providing sectors adding only 100 net new jobs for the month.  Job losses were reported for Transportation & Utilities, Financial Services, and Leisure & Hospitality Services.  Professional & Business services continued to expand, with employment up 500 for the month and up 4,800 since December 2007. 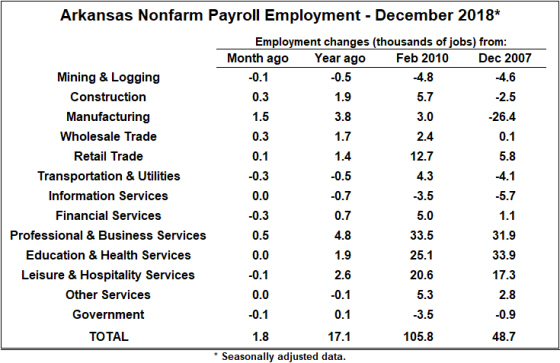 Today’s report is the last monthly update before the annual revisions to the data are announced.  Updated estimates of household employment and the unemployment rate will be released on February 28, and the “benchmark revision” to payroll employment will be unveiled on March 11.