Unemployment rates declined in all of Arkansas’ metro areas in October.  On a year-over-year basis, the not-seasonally adjusted numbers showed declines ranging from 1.5% in Fayetteville to 2.9% in Pine Bluff.  The eight metro areas that include parts of Arkansas were among the 354 out of a total of 372 that saw declines from the previous year.  Smoothed seasonally adjusted estimates showed monthly declines in all eight metro areas as well.  Unemployment declined by 0.3% from September to October in Pine Bluff, and 0.2% in Fort Smith and Memphis.  Rates were down by 0.1% in the remaining metro areas.  Moreover, household employment and labor force figures showed monthly increases in all of Arkansas metro areas except Memphis. 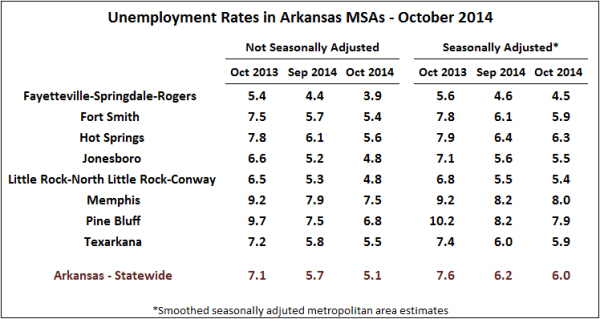 Payroll employment reports were more mixed.  Total nonfarm payrolls were down slightly in Fayetteville, Fort Smith and Texarkana, but were higher in Hot Springs, Jonesboro, Memphis and Pine Bluff.  Employment in Little Rock was unchanged.  The increase in Pine Bluff was particularly notable:  up 1.7% for the month. 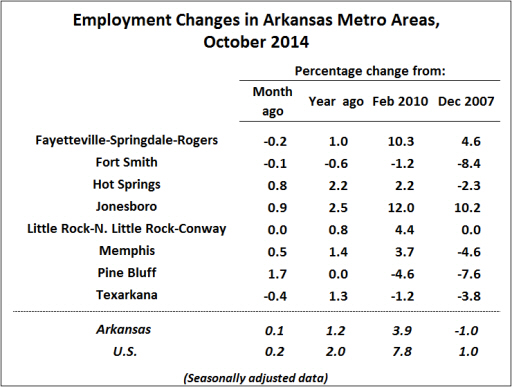 There are still only two metro areas in the state that have seen net employment gains compared to pre-recession levels (December 2007):  Fayetteville and Jonesboro.  The unchanged employment figure for Little Rock left the total unchanged since the pre-recession peak.  Three of the state’s metro areas have actually seen continued employment declines since the trough of February 2010:  Fort Smith, Pine Bluff, and Texarkana.