Unemployment rates ticked up in Arkansas metro areas in June, but rates remain far lower than a year ago.  Today’s news release from the Bureau of Labor Statistics noted that unemployment rates were lower than a year earlier in 285 of the nations 387 metropolitan areas, and all 8 metro areas that cover parts of Arkansas were in that total.  Year-over-year changes ranged from -0.7% in Fort Smith and Texarkana to -1.6% in Pine Bluff. 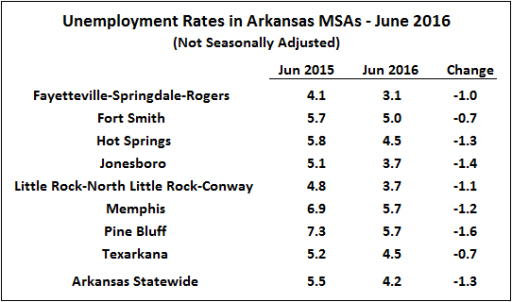 Payroll Employment
Nonfarm payroll employment changes were mixed  From May to June, payrolls declined in Little Rock, Pine Bluff and Fort Smith but were up in the state’s other metro areas.  Employment in Hot Springs was up 0.8%.  From June 2015 to June 2016, employment in three metro areas increased at a higher rate than the statewide average of 1.7%:  Hot Springs increased 3.8%, Fayetteville was up 3.7%, and Jonesboro rose by 3.5%.  Since the employment trough of February 2010, the northwest and northeast corners of the state have seen the strongest job growth (23% in Fayetteville and 16.4% in Pine Bluff).  At the other extreme, employment in Pine Bluff is nearly 10% lower than in February 2010, and is down 12.3% from pre-recession levels. 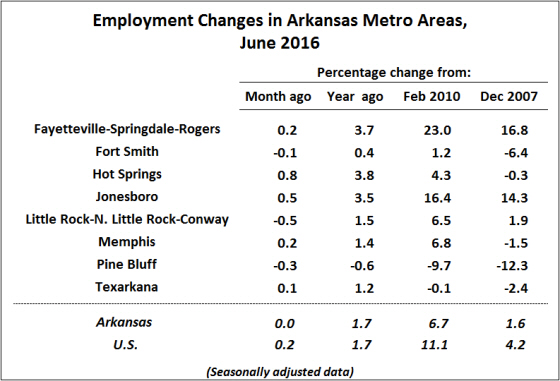 The chart below illustrates the divergent employment trends among the state’s metro areas since the 2008-09 recession.  Fayetteville, Jonesboro and Little Rock are the only three metro areas to have higher employment now than at the end of 2007. 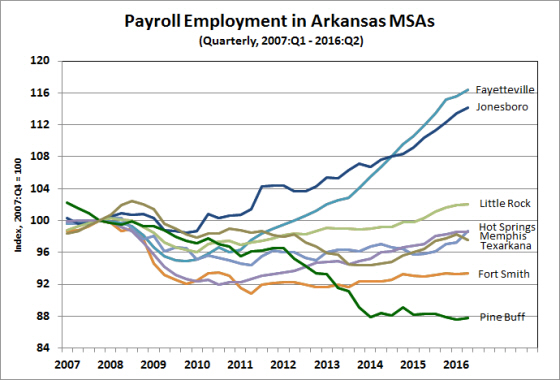