The statewide employment data released two weeks ago showed an ongoing slow pace of recovery in Arkansas labor markets.  The unemployment rate, for example, ticked down by less than one-tenth of a percentage point (seasonally adjusted). Newly published data for metropolitan areas appear to show more significant improvement, at least in some areas of the state.  However, some of that improvement appears to be attributable to problems with the seasonal adjustment procedures for metropolitan areas—particularly in the context of data volatility during the pandemic.

As shown in the table below, unemployment rates declined across most of Arkansas’ metro areas.  In some cases the declines appear sizable.  Rates in the Fayetteville, Fort Smith, Hot Springs, Little Rock and Texarkana metro areas declined by half a percentage point or more.  Only Memphis (which includes one county in Arkansas) saw no decline in unemployment. 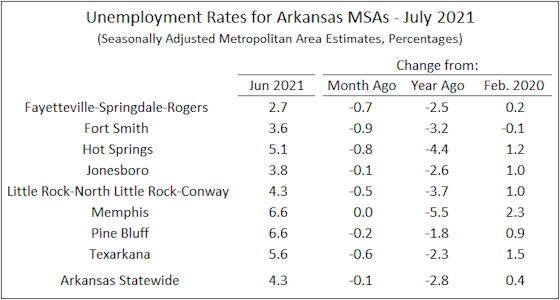 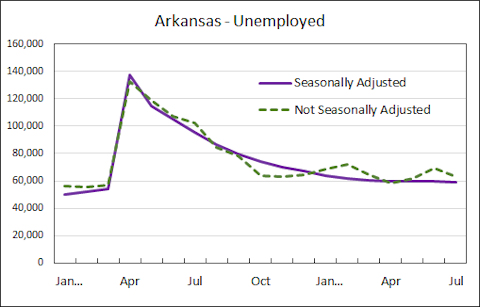 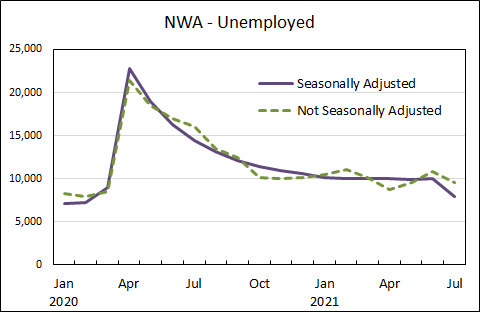 So how to interpret the metro area statistics relative to the statewide data?  With a grain of salt.  Data-collection and processing have been problematic during the pandemic, due to problems with survey methodology and the interpretation of unusually volatile month-to-month observations.  Over the past year, the Bureau of Labor Statistics (BLS) has worked with modified approaches to identifying “outliers” from the typical seasonal patterns, leaving greater-than-usual uncertainty about the interpretation of short-term fluctuations.  In general, the seasonal adjustment techniques used for the statewide data are more robust than the metro area data.  In fact, the seasonally adjusted data for metro area unemployment are not published as part of the BLS’s regular data-reporting programs, but are maintained on a separate page of the Bureau’s website.

So here’s what we can safely say about July unemployment in Arkansas:  The number of unemployed declined sharply, but that is typical of July in general.  In some metro areas, the declines appear to have been larger than would be anticipated for a typical July, but disentangling seasonal and cyclical components is tricky, so we shouldn’t put undue emphasis on the cyclical declines that show up in the metro area data.

From a longer run perspective, however, the picture is more clear.  Unemployment rates have fallen considerably over the past 12 months, with some of the largest declines occurring in those metro areas that experienced the sharpest increases in unemployment during the spring of 2020.  Across the state, unemployment rates remain elevated; but in Fayetteville and Fort Smith, unemployment has nearly returned to pre-pandemic levels.

Payroll Employment
Data on nonfarm payroll employment generally provide a more accurate view of labor market conditions.  The data for July appear to corroborate the indication from the household survey that Fayetteville and Fort Smith are recovering with somewhat more momentum than the rest of the state. The Fayetteville metro area is now showing employment levels above those recorded in February 2020.  Pine Bluff, which experienced proportionally smaller employment declines during the recession, has also made considerable progress toward returning to pre-pandemic conditions.  Among the other metro areas in the state, there was little change in payroll employment in July.  In most metro areas, employment remains below the levels recorded in February 2020, but the gaps remain smaller than for the nationwide average. 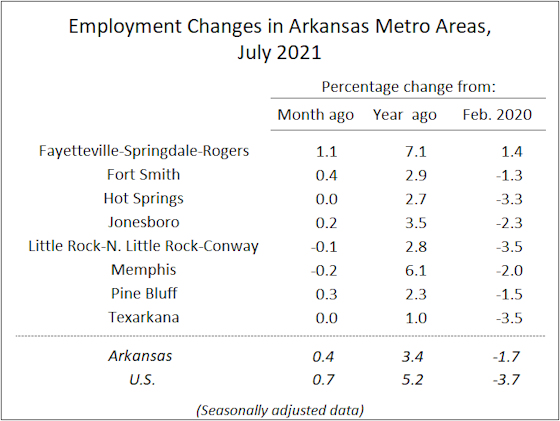