Arkansas Retail Sales declined slightly for a second month in May, but remained well above levels of a year ago or before the onset of the COVID-19 pandemic.  Total Retail and Food Services Sales were down 3%, following a 3.4% decline in April.  The two monthly declines only partly offset a 22% surge in March.  Data from the U.S. Census Bureau showed that national retail sales declined 1.4% in May. 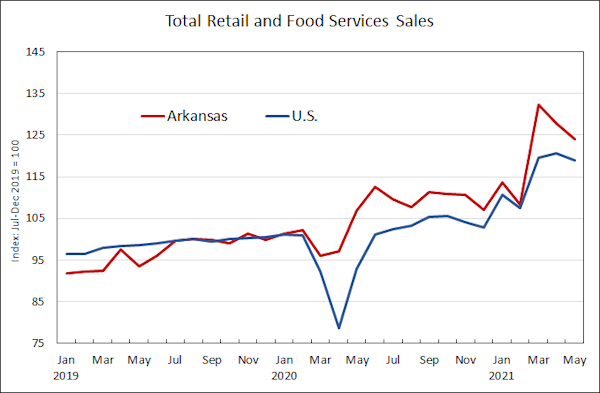 Many industry groups within the retail sector declined from recent highs, with only Motor Vehicles, Electronics and Appliance Stores, and Food & Beverage stores showing monthly increases.  All sectors except for Food and Beverage stores were well above levels of a year earlier. 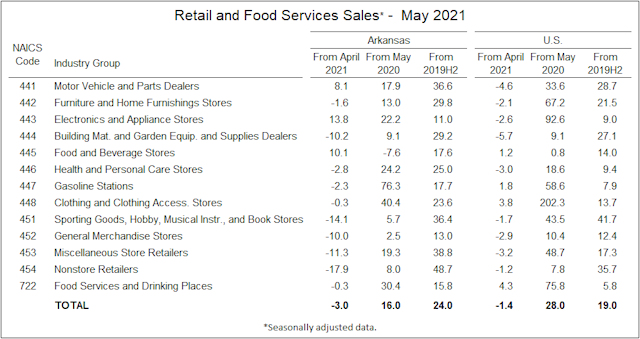 For both the state and national data, sharp increases in sales since May 2020 reflect the extent of weak retail spending over a year ago.  Clothing Stores, for example, showed a pandemic-related decline of more than 50% in Arkansas in April of 2020, while sales were down nearly 90% in the nationwide data. 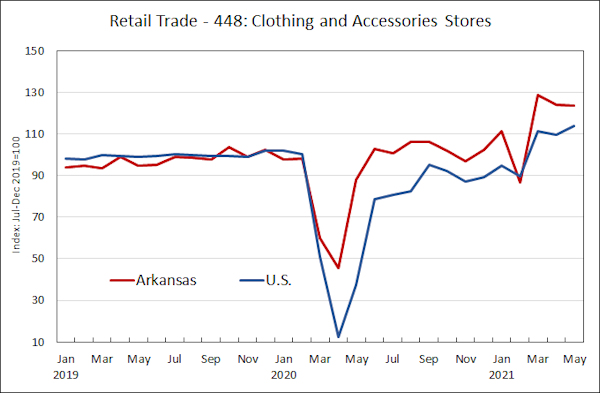 Compared to pre-pandemic sales (in the second half of 2019) sales at Clothing and Accessories Stores are up 13.7% for the U.S., and up 23.6% in Arkansas.  Nationwide, total Retail Trade and Food Service Sales are 19% higher than in 2019H2.  The same comparison shows a 24% increase for Arkansas.

The data for May include an innovation to the measurement of automobile sales data. As described in Arkansas Retail Sales—A New Data Set from AEDI, the data on county-level sales tax collections for autos yields an index of the number of vehicles.  In the past, we have converted this index to a dollar value by scaling the total so that automobile sales have the same relative weight in the state data as in the national data, with 2019 average values as a reference point.  Sales tax receipts on most goods automatically incorporate price changes (since the sales tax is an ad valorem tax), but not so with the county auto tax.  However, price spikes in the markets for new and used automobiles have recently been quite prominent.  For example, used car prices were the single largest contributor to a surge in Consumer Price Index (CPI) in May registering a monthly increase of 7.3% and a year-over-year increase of 30%.

In order to incorporate these significant price swings in the retail sales data for Arkansas, we have applied the price data for New and Used Automobiles to the index values generated from county sales tax receipts.  The valuation base remains the 2019 average.  As shown in the figure below, the incorporation of price data has little effect on the sales data until recent months.  In May 2021, the total for Motor Vehicle and Parts Dealers was up 5.8% from the previous year without price adjustment.  After accounting for price inflation, adjusted sales are up 17.9%. 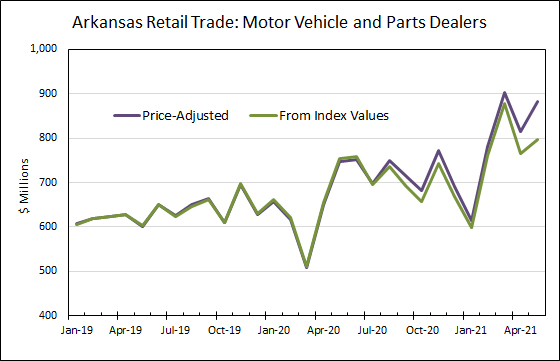 After accounting for the recent surge in auto prices, the data for Arkansas and the U.S. show similar patterns.  The surge in auto sales in 2020 happened earlier in Arkansas than in the rest of the nation, and the persistent increase relative to 2019 has been somewhat larger in Arkansas.  As of May, the nationwide total for sales at Motor vehicle and Parts Dealers was up 28.7% for the U.S. and up 36.6% in Arkansas (relative to the second half of 2019). 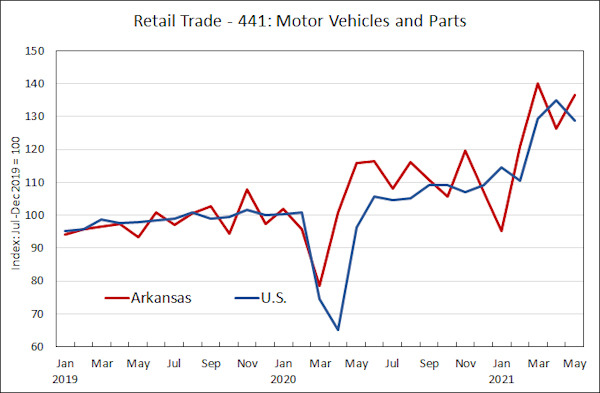 This month’s data required on technical adjustment of note: The raw data for Garland County showed gross tax revenue of over $5 million for the sector 4441: Building Materials and Supplies Dealers. This was up from an average monthly value of about $216,000. In fact, the entire monthly tax receipts for Garland County are typically far less than $5 million, and this particular monthly report includes an unexplained “other adjustments” to  total net tax revenue that offsets most of the impact of the outlier on the county’s bottom line.  Rather than assume that the adjustment reflects a direct offset to the reported sales in sector 4441, however, we estimated a time-series model using data from the City of Hot Springs to forecast changes in Garland County sales for that sector.  (Log first-differences of the two series have a correlation coefficient of 0.939.)
Tweet