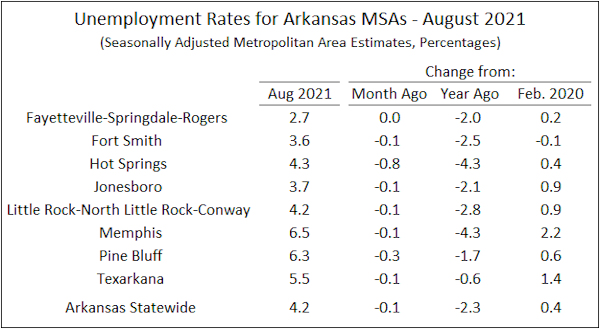 Relative the pre-pandemic conditions, the recovery in Fort Smith has been significant:  The August unemployment rate of 3.6% was the second-lowest in the state, and is 0.1 percentage point lower than it was in February 2020.  Unemployment in Memphis and Texarkana remains elevated, but the unemployment rates in Fayetteville, Hot Springs, Jonesboro, Little Rock and Pine Bluff are all less than one percentage point higher than at the last business cycle peak.

Payroll Employment
Nonfarm payroll employment increased in five of Arkansas’ metro areas in August, with the largest increase in Northwest Arkansas (+0.6%).  Employment in Hot Springs and Texarkana was down for the month, with Little Rock unchanged. 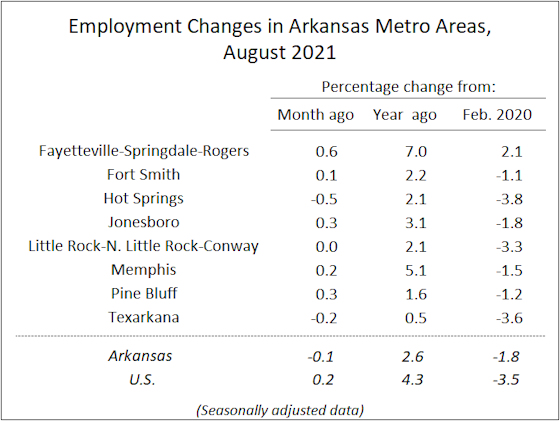 After the August increase, employment in the Fayetteville MSA represented a net gain of 2.1% relative to February 2020.  Employment in all other metro areas remains below pre-pandemic levels with the net declines having narrowed to between 1% and 2% in Fort Smith, Jonesboro, Memphis and Pine Bluff. In the remaining metro areas—Hot Springs, Little Rock and Texarkana—employment remains more than 3% lower than in February 2020.

Taking the latest data at face value, it is clear that the Fayetteville metro area—which was growing at the fastest rate before the pandemic—has experienced the most robust recovery among Arkansas’ metro areas.  Fort Smith has also shown significant improvement, with the second-lowest unemployment rate and the second-best net employment change since February 2020.  Indicators from the household survey and the payroll survey give mixed signals regarding other metro areas, but Texarkana stands out as one of the three highest unemployment rates and one of the three largest net employment declines since the onset of the COVID-19 recession.