New data from the U.S. Bureau of Economic Analysis reports that Arkansas Personal Income declined by 8.5% in the second quarter (an annualized rate of -29.8%). Nationwide, the second-quarter decrease in income was 6.0% (-21.8% annual rate). Income declines in the second quarter were the result of a sharp drop in Transfer Payments, as pandemic-related assistance programs wound down. Consequently, the states experiencing the largest declines in the second quarter income were the same as those that saw the largest increases in the first quarter. For example, Arkansas’ second-quarter decline was the 6th largest decline among the 50 states, while the 14.9% increase in the first quarter (74.5% annualized rate) was the nation’s 5th highest.  More generally, the correlation of first quarter with second-quarter growth rates across the states was -0.88. 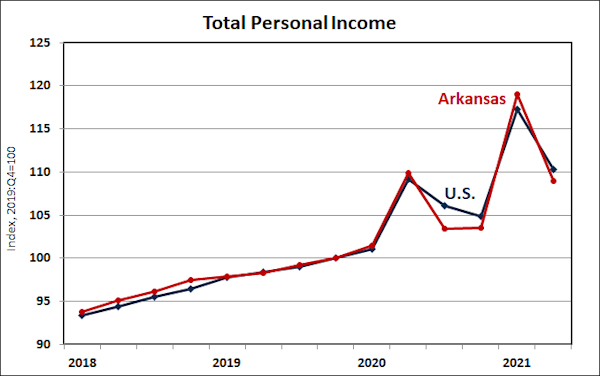 Removing the effect of government transfer payments, personal incomes continued their robust recovery from the pandemic-related downturn a year ago.  Arkansas Personal Income less Transfer Receipts rose at a 9.6% annual rate in the second quarter, compared with a 9.2% rate in the U.S. data.  Since the trough of 2020:Q2, this measure of income has increased 10.6% in Arkansas an 10.4% in the nationwide data. 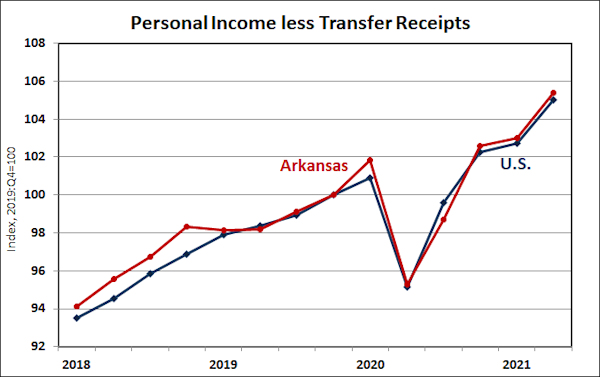 All major components of personal income except transfer receipts increased in the second quarter.  Proprietors Income surged by 16.1% and was 53.5% higher than its dismal reading of one year earlier.  Wages and Salaries rose 1.3%, for a cumulative 4-quarter change of 12.0%.  Dividends, Interest, and Rent was up 1.2% for the quarter, which represented a 1.4% increase from a year earlier. 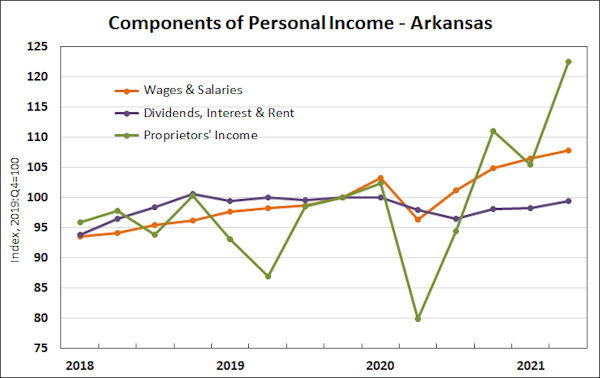 With most government support and stimulus programs winding down, personal income is expected to return to a more normal growth pattern over the remainder of the year.