The establishment survey for August showed payroll employment higher in all eight metro areas covering parts of Arkansas.  The household survey, on the other hand, showed higher unemployment for six of the eight. 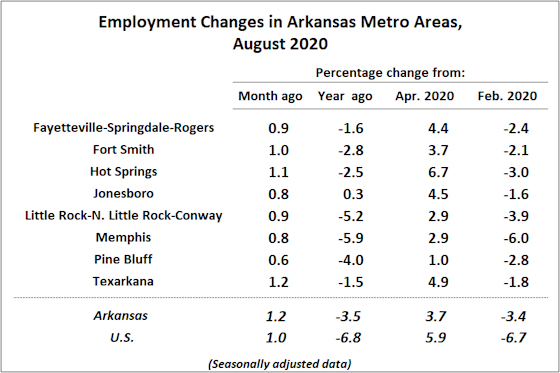 The monthly employment increases represented continuing recovery from the pandemic recession, but employment in most areas of the state continue to be lower than year-ago levels.  The exception is Jonesboro, where employment was 0.3% above August 2019.  Outside Jonesboro, year-over-year growth rates ranged from -5.9% in Memphis to -1.5% in Texarkana.  Looking more directly at the short-term fluctuations surrounding the February-to-April employment downturn, all eight metro areas have rebounded considerably, but all eight continue to show net employment declines since February.

Unemployment Rates:
The statewide employment report had shown an increase in the Arkansas unemployment rate in August.  The metro area report shows that unemployment in six of the state’s eight metro areas also ticked higher.  The exceptions were Fort Smith and Texarkana, each of which declined from July to August. 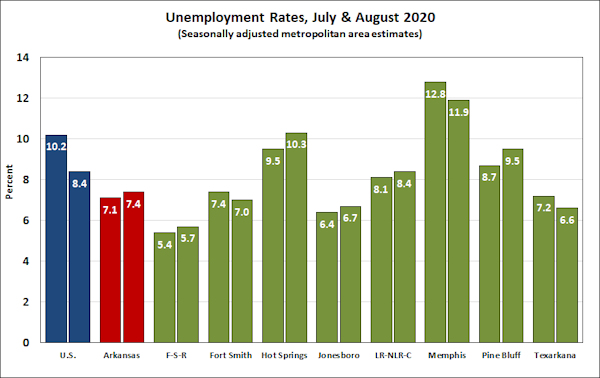 As with the payroll data, the unemployment statistics seem to suggest that non-metro parts of the state showed relative improvement in August.  As documented in the county map below, unemployment rates declined in 62 of Arkansas’ 75 counties, were unchanged in 3, and increased in only 10 counties across the state.  Counties that showed increases included Garland, Jefferson, Lincoln, Madison, Pulaski, and Washington — each of which is part of a metropolitan area.

The data are subject to revision, but the information for August suggests that Arkansas metro areas are recovering slowly, but are still being held back by the limited resurgence of service sector employment.  Nonmetropolitan areas, being less dependent on service-providing industries, appear to be experiencing somewhat more robust recoveries — at least in some parts of the state.

The Arkansas Delta region seems to be an exception.  The map below shows the cumulative changes in unemployment by county from February through April.  In addition to the metropolitan counties that show the largest sustained increases, counties in the eastern and southern areas of the state show relatively large increases in unemployment as well. The unemployment rate in Mississippi County is up 4.8 percentage points, Lafayette County is up 4.0, Union and Desha Counties both up 3.9, and St. Francis and Chicot Counties are both up 3.8 percentage points.