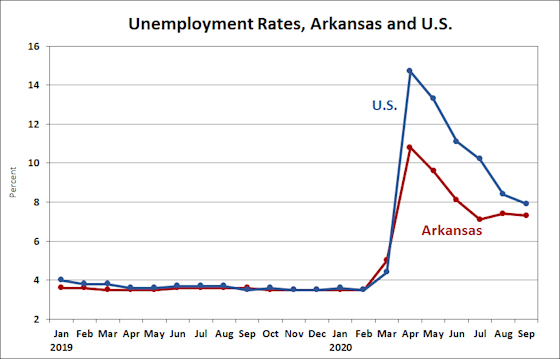 As shown in the breakdown below, the number of unemployed has hovered just below 100,000 for three months now, falling slightly from 99,517 in August to 97,191 in September. The number of employed also declined in September (-5,391), but not nearly enough to offset the gain from the previous month (+31,032, revised).  Similarly, the labor force contracted slightly in September after surging upward in August.  The labor force data have been particularly volatile, suggesting large movements in and out of the labor force.  Moreover, problems defining labor force status in the presence of temporary furloughs and layoffs has complicated the interpretation of the labor force participation data. 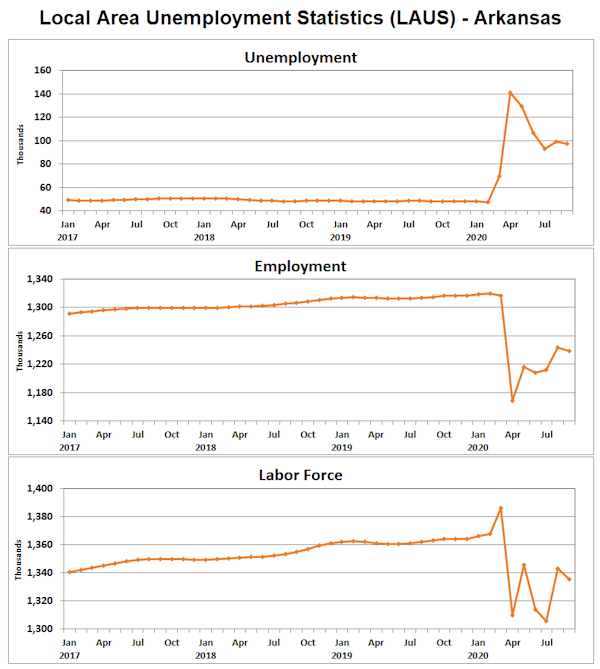 Payroll Employment
Without seasonal adjustment, nonfarm payroll employment increased by 13,200 in September. However, the increase is largely attributable to seasonal increases in educational services in both the private and public sectors.  After seasonal adjustment, private education services were down 800 jobs and total government employment was down by 3,700.  The seasonally adjusted declines indicate that back-to-school employment increases are smaller this year than typically the case for September.

Seasonally adjusted, nonfarm payrolls declined 1,700.  As shown in the third column of the table below, increases in Manufacturing, Education and Health Services, and Leisure and Hospitality Services were noteworthy for continuing the recovery from COVID-related shutdowns earlier in the year.  The increase in manufacturing employment is a welcome improvement from a sector that had remained near its April trough.  The gain in Education and Health Services as entirely attributable to higher employment in Health Care and Social Assistance.  Gains in Leisure and Hospitality show ongoing improvement, but with employment remaining more than 17,000 below the pre-COVID peak.

The cumulative changes shown in the fourth column of the table show that the Wholesale Trade, Retail Trade, and Transportation & Utilities sectors have all moved into positive territory, showing net gains relative to February.  While several sectors continue to operate below capacity and with employment sharply down from earlier in the year, other sectors are showing increasing employment.  In the case of the trade and transportation sectors, it appears that efforts to address logistics and supply-chain problems during the economic shut-down has generated job growth during the period of recovery. 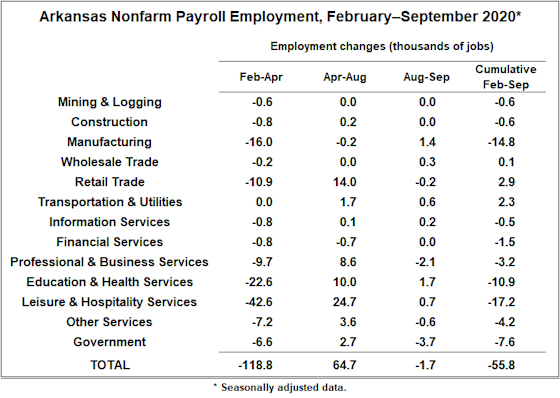 The trends in payroll employment for Arkansas and the U.S. remain favorable, despite the one-month decline in the Arkansas data for September.  The pace of employment growth nationwide has slowed in recent months, as has growth in Arkansas.  There is more month-to-month variability in state-level employment growth, so it is important to bear in mind that one month of data rarely indicates a change in trend; September’s modest down-tick doesn’t necessarily indicate a stalling of job growth, but rather a slowing of the pace of economic recovery. 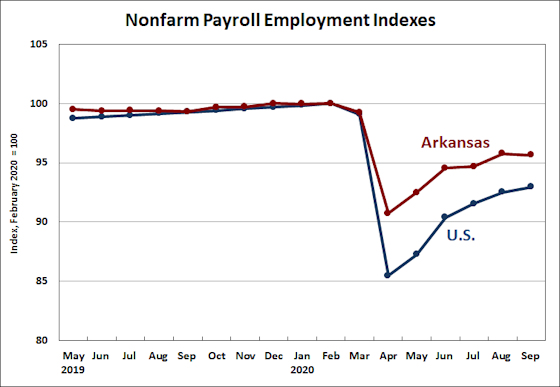 Overall, the trends continue to show improvement in both state and national labor markets.  But the pace of the improvement has slowed somewhat as we move into the fall months.