This week’s report on metro area employment and unemployment in April revealed another round of plummeting unemployment rates, accompanied by mixed readings on job creation.  The conflicting signals from the household and payroll surveys continue to present something of a puzzle.  As shown in the first table below, unemployment rates have declined sharply over the past 12 months — by nearly two percentage points in some areas (and even more in Pine Bluff). 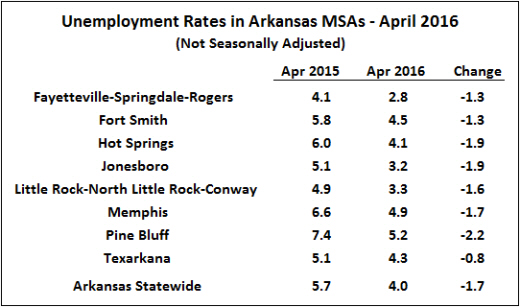 Payroll Employment
The monthly changes in nonfarm payroll employment in Arkansas’ metro areas was not nearly as impressive as the falling unemployment rates suggest.  Payroll employment growth from March to April was strong in Fort Smith and Hot Springs, but the gains were much smaller in other metro areas — and payrolls declined in Little Rock and Texarkana. 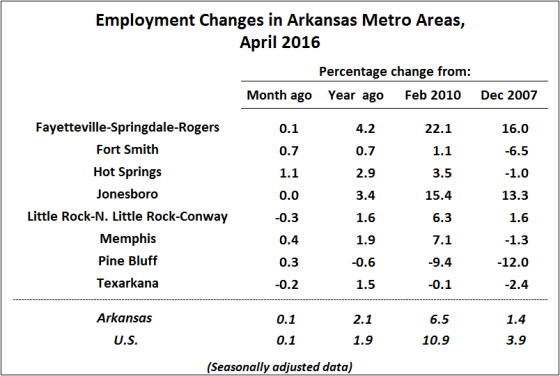 The contrast between the household and payroll surveys is highlighted in the final table below, which reports the change in employment from December through April, as measured by the two data sets.  The declines in unemployment rates are based, in part, on the employment gains measured by the household survey.  The four-month percentage changes range from 1.3% in Fort Smith to 3.1% in Jonesboro.  On an annual basis, these growth rates translate to as much as 9%.  Meanwhile, the numbers from the payroll survey show much more muted gains, and in the case of Fort Smith and Texarkana, even negative growth. 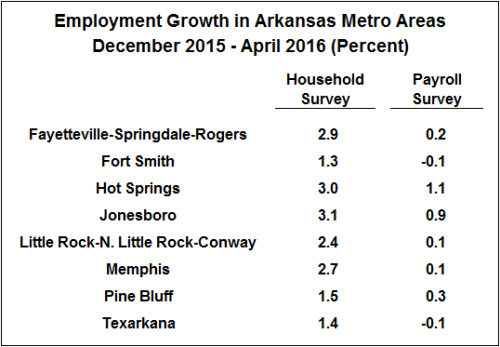 Generally speaking, the numbers from the payroll survey are considered more reliable, but  both sets of data are subject to revision at the end of the year.  It might be some time before the diverging patterns are reconciled.  In the meantime, while it is clear that the trends are generally positive, it is probably wise to remain somewhat circumspect about the implications of recent readings on unemployment.