The BLS report on employment and unemployment in counties and metropolitan areas for December was released this morning.  For Arkansas, the data showed that the changes reported in the remarkable state-wide report for December were widely reflected in local statistics across the state.

To review: When the state-level employment report was released two weeks ago, the most notable (incredible?) news was the decline in the unemployment rate from 6.3% to 4.2%.  Underlying the drop was a surge in the number of employed (up 5.6% from the previous month) and a sharp reduction in the number of unemployed (down 31.8% from November).  Taken at face value, this drop suggests that nearly one in three of those unemployed in November found employment in December (at least statistically speaking—gross labor market flows are more complex).  These figures are gleaned from the BLS’s Household Survey (a.k.a., the Current Population Survey), which is always subject to a wide range of uncertainty and which has been plagued by and problems during the pandemic.  Meanwhile, the nonfarm payroll statistics, generated from the Establishment Survey (officially known as the Current Economic Statistics survey), showed a significant  increase in total statewide employment in December—but nowhere near the magnitude of the increase reported in the Household Survey.

Metro Payroll Employment
Beginning with the metropolitan area report on nonfarm payroll employment:  The December report showed total employment up in five metros, down in two, and unchanged in Hot Springs.  In percentage terms, gains in Fayetteville, Little Rock, Memphis and Texarkana were greater than or equal to the statewide rate of increase. 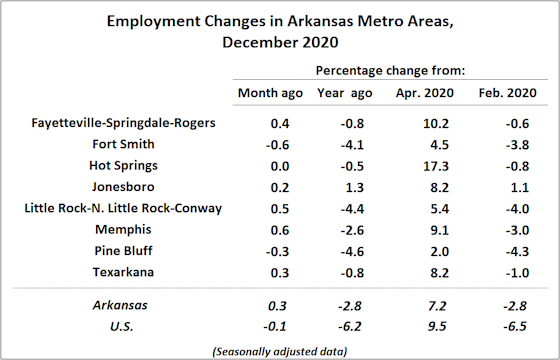 Compared a December 2019, most metro areas showed employment declines in December 2020.  The exception was Jonesboro, which showed a 1.3% gain for the year.  Hot Springs has shown a remarkable rebound after experiencing the sharpest decline of any Arkansas metro area during March and April.  Compared to a year earlier, Hot Springs employment is down only 0.8%.  Among the other metros showing year-over-year declines, Fort Smith, Little Rock, Memphis and Pine Bluff registered larger percentage declines than the statewide average of -2.8%. 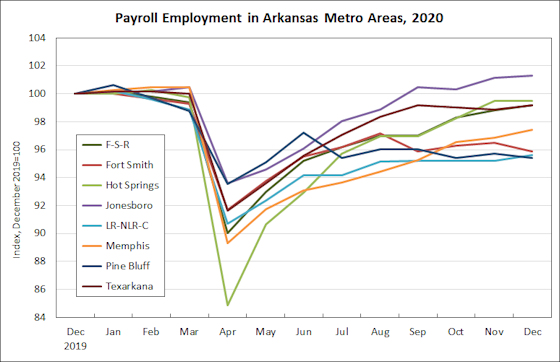 Metro Unemployment
On the Household Survey side of the report, sharp declines were registered for each metro area except Memphis. Unemployment rates in Fayetteville and Jonesboro dropped below 4% and Little Rock’s rate declined to 4.5%. 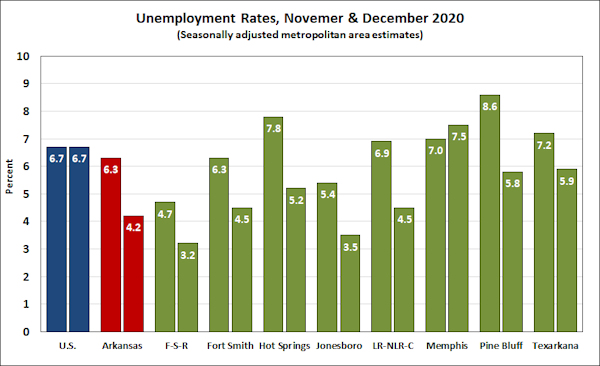 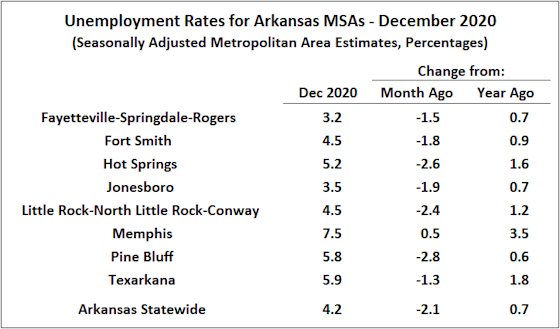 Comparing the numbers from the Household Survey (HH) and the Payroll Survey (NFPE), the first two columns of the table below compare percentage changes for employment from November to December, with obvious differences between the two. Memphis is a particular outlier for both measures, 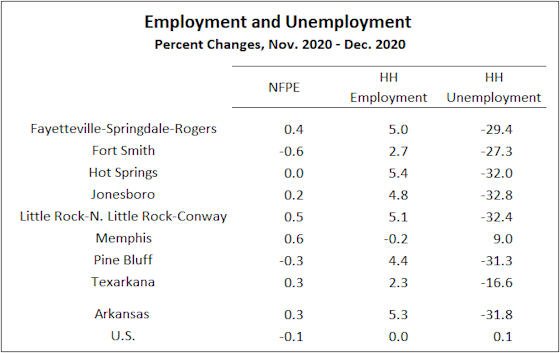 The common patterns for most metropolitan areas within Arkansas—and the differences displayed by those with significant geographical regions outside of the state of Arkansas—leads one to suspect that the process of allocating estimated statewide changes to local areas might be important for interpreting the metro (and county) data.

In terms of the changes in the numbers of employed and unemployed, the county-level data closely correspond to the statewide totals.  The number of unemployed declined in all 75 counties, with changes ranging from -14.8% in Columbia County to -32.7% in Crittenden County.  The median change among the counties was -27.8%.  Similarly, increases in the number of employed were in a relatively tight range:  From +5.1% in Crittenden County to +2.8% in Montgomery County.  The median was +4.1%.

Overall, the statistics for Arkansas’ metro areas conform to the statewide totals released two weeks ago.  Given the current situation, measurement of key economic indicators is subject to wider-than-usual ranges of uncertainty.  That seems to be particularly true for the data associated with the Household Survey.  While the magnitudes of changes in employment and unemployment near the end of 2020 are subject to likely revisions, the overall takeaway from the December employment reports—state, metro, and county—is that labor market conditions improved in Arkansas toward the end of the year, albeit perhaps not as significantly as these initial statistics suggest.