The latest data on local area employment and unemployment show that most regions of the state continue to recover from the economic downturn we experienced in March and April.  October unemployment rates were down in all of Arkansas’ metro areas (except Memphis) and were down in all 75 counties.  Payroll employment expanded in five of eight metro areas in October—in some cases significantly.  Regional differences remain, however, as both the severity of the downturn and the strength of recovery differ among local economies.

As shown in the table below, payroll employment expanded by over a full percentage point in Northwest Arkansas, Hot Springs, and Memphis. Employment also increased in Fort Smith and Jonesboro.  Little Rock was unchanged, while Pine Bluff and Texarkana were down compared to the previous month.  Nevertheless, since the employment trough of April 2020, all eight metro areas have seen employment gains, ranging from 2% in Pine Bluff to nearly 16% in Hot Springs.  In part, these differing rates of recovery reflect the magnitude of the initial downturn:  Hot Springs saw the largest job losses in the state from February to April, while Pine Bluff experienced the smallest percentage decline. 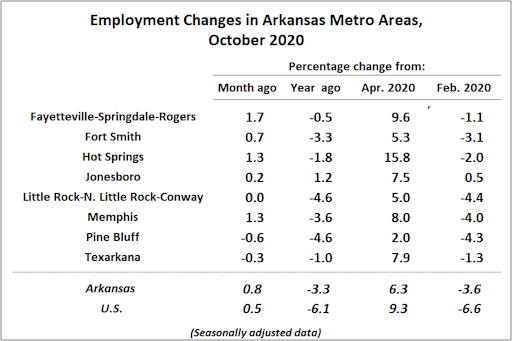 Compared to the cyclical peak month of February 2020, Jonesboro has recovered to the point of having a net gain in employment, while net declines remain in the other metro areas.  Little Rock, Memphis, and Pine Bluff continue to show net job losses of 4% or greater, with the others down between one and three percent.

Unemployment rates were down in seven of eight metro areas, the exception being Memphis, where the rate increased from 9.3% to 9.9%. In a month when the state and national unemployment rates declined by one full percentage point, we saw declines of one percent or more in Hot Springs, Jonesboro, Little Rock and Pine Bluff.  Texarkana and Fayetteville were down 0.9 percentage points.  The change in Fort Smith was smaller, but still indicated improvement. 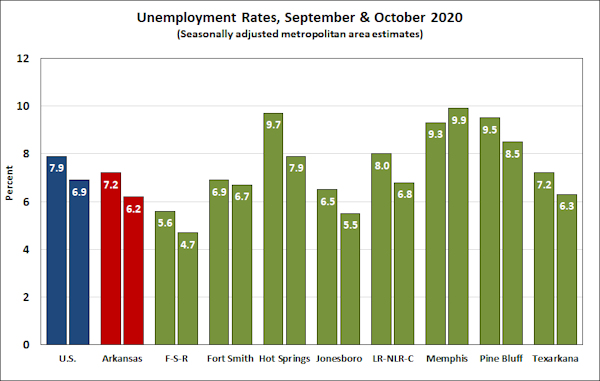 At the county level, unemployment rates declined all 75 of Arkansas’ counties  in October.  Because the county data are not seasonally adjusted, a portion of these gains can be attributed to seasonal factors.  Nevertheless, the declines in all 75 counties exceeded the typical seasonal movement (at the statewide level) of approximately -0.25 percentage points.  The interactive map below summarizes October employment rates and shows the changes for each county from September to October.