Last Friday’s employment report suggested a contrast between the underlying statistics driving the Arkansas and U.S. unemployment rates.  In particular, the national unemployment rate fell in April but this was at least partly attributable to a decline in the size of the labor force.  Analysts were quick to point out that this phenomenon did not represent positive economic news (see, for example, the Washington Post article:  “Jobs report shows effects of the incredible shrinking U.S. labor force“).  However, the April decline in Arkansas’ unemployment rate took place in the context of an increase in the state’s labor force.   Quoted in the Arkansas Democrat-Gazette, I commented that “we’re seeing the labor force expanding and the employment market is able to absorb those new workers.” 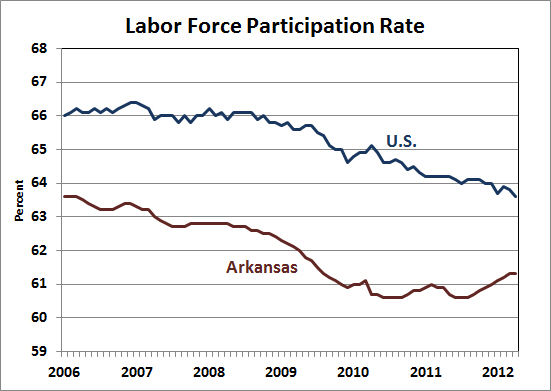 A closely-related measure — the employment/population ratio — reveals another perspective on the difference between labor-market conditions in Arkansas and the U.S. as a whole.  As shown in the chart below, the U.S. employment/population ratio has been flat throughout the period of economic recovery.  Recent gains in nationwide employment have kept pace with population growth, leaving the ratio little-changed.  In Arkansas, however, recent employment growth has outpaced population growth, leading to a higher proportion of the potential workforce with jobs. 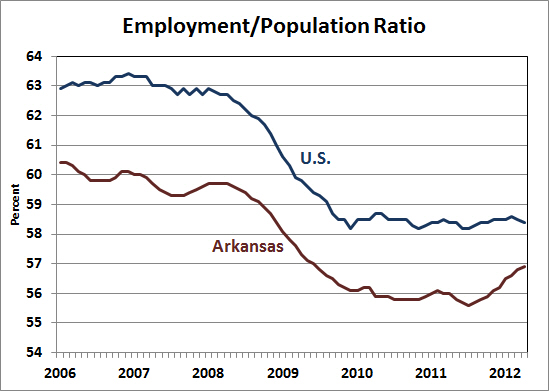 These statistics are not definitive — they are subject to a fairly wide range of uncertainty and are subject to future revision.  Taken at face-value, however, the labor-force participation rate and employment/population ratio provide evidence to support the conclusion that Arkansas’ falling unemployment rate truly reflects improvement in the state’s labor-market conditions.