The latest data from the Federal Housing Finance Agency (FHFA) suggest a slight increase in home prices nationwide, with prices in Arkansas increasing at a rate above the national average.  Yesterday’s FHFA report emphasized the seasonally-adjusted purchase-only index which showed U.S. house prices up 0.6% from the previous quarter, and up 0.5% from the same quarter a year earlier — “the first annual increase since 2007.”  By the same measure, house prices in Arkansas were up 0.3% for the quarter and up 1.3% from a year earlier. 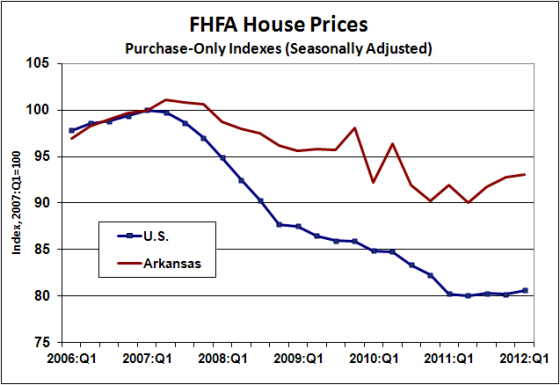 The pattern of home-price changes across the nation shows a wide divergence in house price changes.  Prices continue to decline in some areas of the country that experienced particularly dramatic home price increases during the housing price bubble and subsequently have experienced large declines (e.g. Nevada, California, Illinois and Georgia).  Other states appear to be recovering (e.g. Florida, Arizona, and Michigan).  Arkansas ranks #22 among the 50 states for its rate of home-price appreciation over the past year. 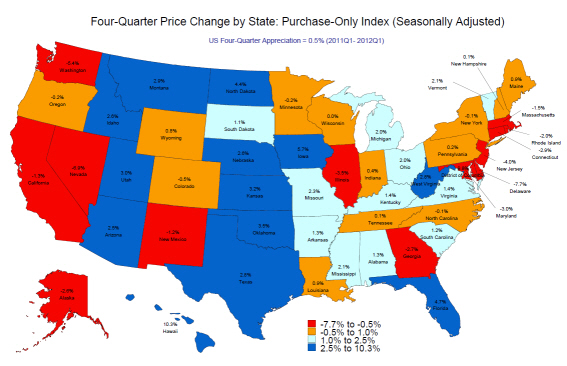 The FHFA all-transactions indexes (which include home refinancing appraisals) showed considerably less price-appreciation.  For the U.S., the all-transactions index was down 1.3% for the quarter and down 1.4% compared to a year ago.  In Arkansas, this index of house prices fell slightly from the previous quarter (-0.7%) but was up 0.5% from the first quarter of 2011.

The all-transactions index is important because it is the only measure that is published for all of the nation’s metropolitan areas.  As shown in the table below, first-quarter changes in home prices for Arkansas metro areas were mixed.  Compared to the fourth quarter of 2011, prices were down in five of the state’s metro areas, but showed fairly large increases for Hot Springs, Pine Bluff and Texarkana.  Compared to a year earlier, however, prices were up in all MSAs except for Fayetteville and Memphis.  From a longer-term perpsective, these are also the only two metro areas in which prices are lower than five years ago (2007:Q1). 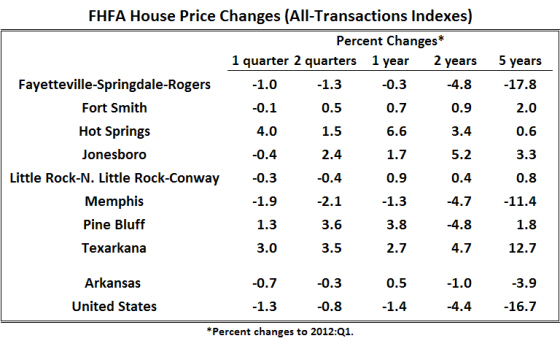