Last week we reported on the comprehensive employment statistics from the Quarterly Census of Employment and Wages (QCEW).  This week the BLS released a detailed report on Arkansas, and the business media have tended to focus on the wages component of that report.  The Arkansas Democrat-Gazette, for example, ran the story under the headline “$738 weekly salary ranks state at 47th.”  The low ranking for wages in Arkansas should come as no surprise.  Arkansas has long been near the lower end of the nation’s income distribution, and relative rankings change very slowly.

As shown on the map below, there are fairly wide discrepancies in average weekly wages among Arkansas counties.  The fourth quarter data show average weekly wages ranging from a high of $885 in Calhoun County to a low of $436 in Newton County.  None of the counties in Arkansas meet the national average of $971. 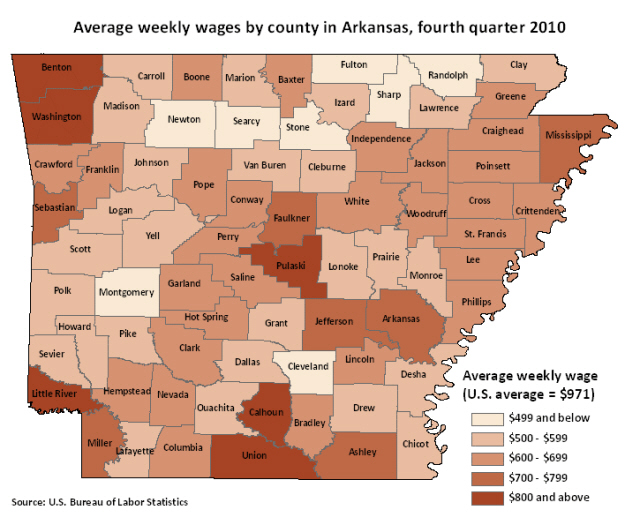 But income comparisons convey only part of the story.  Differences in the standard of living in different states and regions also depend on costs of living.  In general, states with lower wages also tend to have lower living costs, so that differences in purchasing power are not as pronounced as they might appear when considering wage data alone.

According to data from Council for Community and Economic Research (C2ER), Arkansas ranks as having the fourth-lowest cost of living in the nation.  Based on a sample that includes groceries, housing, utilities, transportation, health care, and miscellaneous goods and services, the C2ER composite index for Arkansas for 2010:Q4 is 90.61 — that is, the cost of living in Arkansas is almost 10% lower than the national average.

As shown in the table below differences in cost of living tend to narrow the differences in living standards from state to state.  Using the raw wage data alone, Arkansas average weekly wages of $738 amount to only 76% of the national average.  After adjusting for the relatively low cost of living, the purchasing power of those wages are nearly 84% of the national average, and Arkansas moves up the rankings to #40. 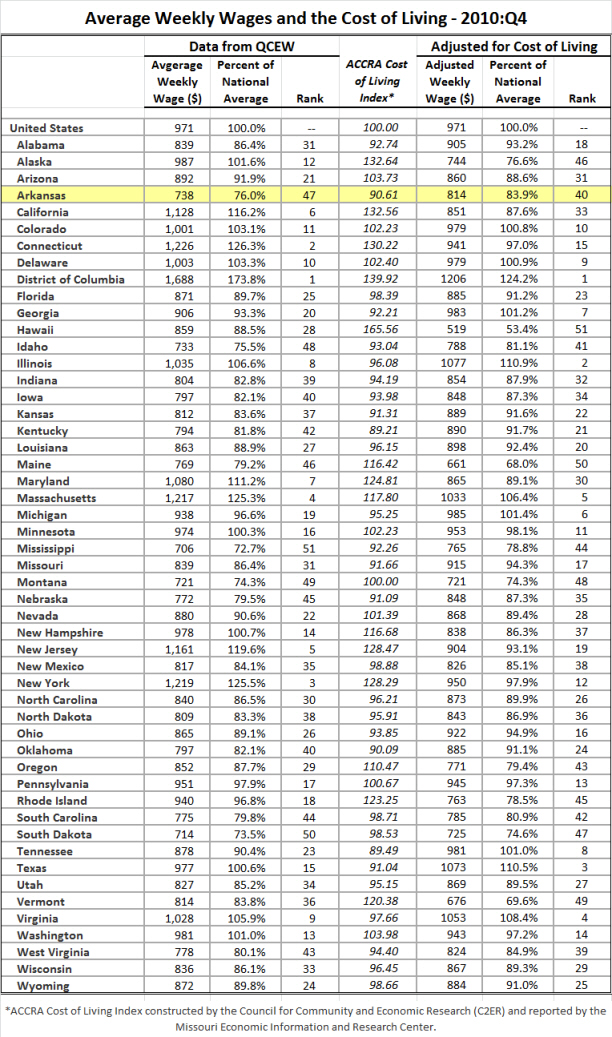 The tendency for average wages and the cost-of-living to covary positively is not coincidental.  In international economics, the relationship is known as the Balassa-Saumaulson effect, a productivity-based explanation of  why price levels tend to be lower in low-income countries, after adjusting for exchange rates.  Even in an economy as regionally integrated as the United States (and with no variable exchange-rates to consider),  goods that are traded nationwide can have a local service component.  Lower local wages tend to drive down the local (nontradeable) component of costs, keeping the average price level lower than in high-wage areas.  Over time, we would expect (and hope) that wages in Arkansas tend to converge toward the national average.  The key to this process is capital accumulation — of both physical and human capital.  But a side effect of this process is that we should also expect the cost of living to rise as well.  Convergence in standards of living can therefore be an even slower process than wage convergence.