Arkansas Unemployment – Worse Than We Thought 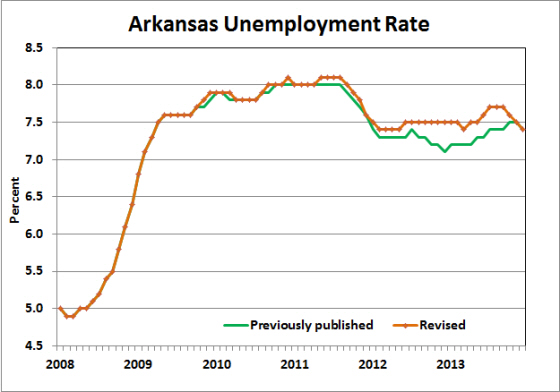 The figures below show the revisions to the underlying components of the unemployment rate.  In late 2012 and early 2013, reports had suggested that the number of Arkansans unemployed dropped below 96,000.  The revised data indicate that the true number hovered closer to 100,000, before rising to 102,000 in August.  Meanwhile, the number of employed had been persistently overestimated:  The downward revision to household employment averaged more than 9,000 during 2012 and 2013, reaching a peak of nearly 21,000 in December 2012.  The net effect of these revisions was that the size of the Arkansas labor force had been also been persistently overestimated. 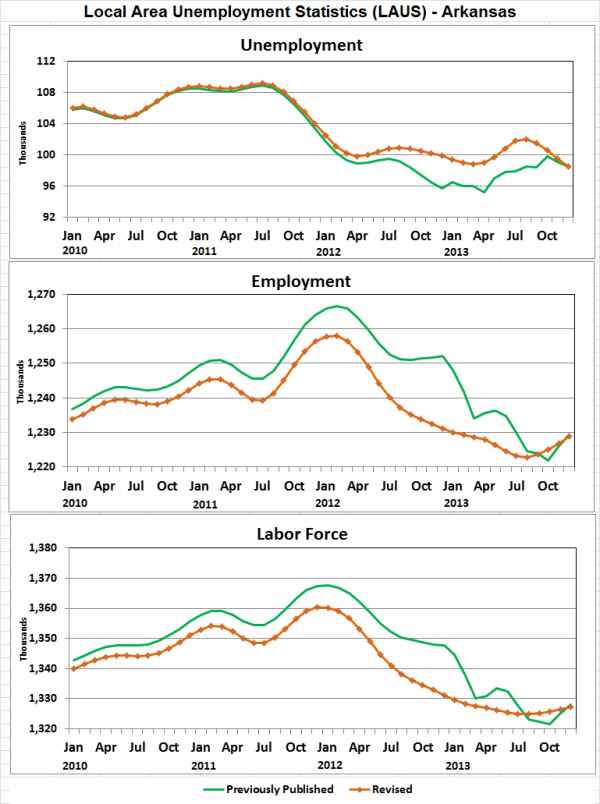 The downward revision to the level of household employment had the effect of reducing the magnitude of the measured change in 2013.  Nevertheless, the BLS news release notes that Arkansas had the dubious distinction of having the second-largest decline in the employment-population ratio among the 50 states plus D.C. (-1.0 percentage point).

Household vs. Payroll Employment
The revisions to the household employment data help to explain the puzzling divergence of the BLS’s two independent measures of state employment.  Before the revisions, household employment was showing a contraction of over 36,000 jobs from January 2012 through December 2013.  The revised data suggest that employment never rose as high as previously estimated, so the decline during 2012 and 2013 amounted to only 29,000 employed workers.  This drop-off is still inconsistent with the data from the payroll survey, which shows an employment increase of 16,500 over the two-year period.

We are only days away from the release of revised estimates for payroll employment (March 17).  The new payroll figures are likely to further narrow the gap between household and payroll employment (unfortunately).  Our latest — and final — projection for the downward revision is for a downward shift of 11,400 payroll jobs as of December 2013.*  If accurate, this would indicate that payroll employment expanded by only 5,000 jobs from January 2012 to December 2013.  This still leaves a puzzling gap between the employment estimates from the household and payroll surveys, but the unexplained discrepancy is narrowing as more accurate estimates emerge. 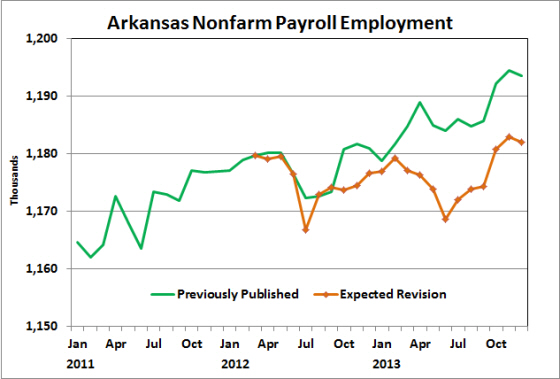 The latest revisions to the household employment data and the expected revision to the payroll employment data might not fully reconcile the discrepancies between the two series, but they do share a common theme:  As weak as the Arkansas employment situation has appeared in recent months, emerging data suggest that it is even worse than we thought.

*The expected revision to payroll employment is forecasted using underlying data from the Bureau of Labor Statistics (Quarterly Census of Employment and Wages) and the Arkansas Department of Workforce Services (Arkansas Covered Employment & Earnings).