New data on personal income that came out last week included first-published data for the second quarter of 2014, along with revisions going back as far as 2001.  The news on personal income for Arkansans was generally quite positive, but also highlighted some areas of weakness in the state’s economic expansion since the 2008-09 recession.

The news for the most recent quarter was certainly upbeat:  Personal income in Arkansas rose 1.9%–above the national average of 1.5% and ranking Arkansas as the 7th fastest growing state for the quarter.  A revision to the data for the first quarter of the year was also good news:  Previously reported as a decline of 0.2%, the revised data for 2014:Q1 showed an increase of 0.8%.  The update to the first quarter data was largely due to a substantial upward revision to estimates of farm income (which accounted for much of the weakness in the first-published report).  As shown in the chart below, Arkansas personal income is 18.5% higher than at the previous cyclical peak of 2008:Q2.  Over the same period, U.S. personal income is up 17.4%.  On the basis of overall personal income, Arkansas’ cumulative recovery is faring slightly better than the nation’s. 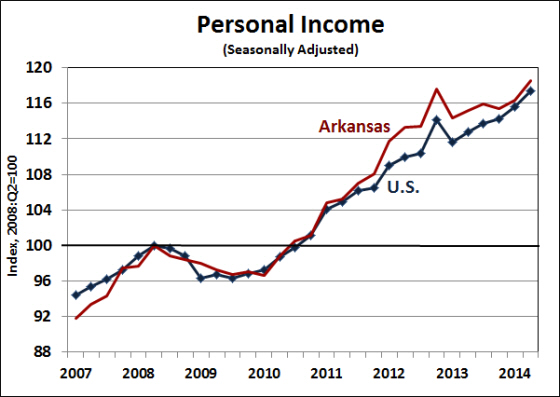 The past revisions to the data for Arkansas were also positive.  As shown in the chart below, the data for 2012 and 2013 were revised upward substantially — averaging 2.3% over that two year period.  The spike in income during the fourth quarter of 2012 was subject to a particularly large revision.  Recall that this spike was attributable to income-shifting associated with changes in income tax laws that went into effect at the beginning of 2013 (see, Arkansas Personal Income – How Policy Has Affected Growth).  It is therefore not surprising that the revision for 2012:Q4, in particular, was primarily attributable to an upward revision of the Dividends, Interest, and Rent component of overall personal income. 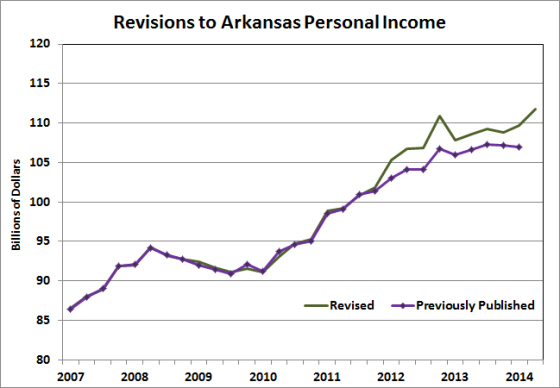 In fact, the entire revision was attributable almost exclusively to the Dividends, Interest, and Rent component.  Of the total average upward revision for 2012 and 2013, Wages and Salaries accounted for approximately 1% and Proprietors’ Income accounted for about 19%.  Transfer Receipts and Employer Contributions for Pensions and Insurance were revised downward.  After those downward revisions in other components, the Dividends, Interest, and Rent component was left to account for 114% of the total revision.

The revision to Dividends, Interest, and Rent reflects a realization that recent earnings on returns to wealth were larger than previously recognized.  But the small revision to Wages and Salaries suggests no improvement in the record on labor compensation during the business cycle expansion in Arkansas.  And even before the data revisions, the pattern was skewed — the new data highlight the imbalance.

The two charts below (using the newly revised data), show how the two components have fared in Arkansas relative to the national average.  The first shows Wages & Salaries, which comprise about 55% of total income in Arkansas.  While the data show that the recession did not impact Wages and Salaries in Arkansas as much as the rest of the nation, the pace of recovery has been slower.  Compared to the peak quarter of total personal income, Arkansas has seen a cumulative increase of 13.0%, while the U.S. increase has been 13.8%. 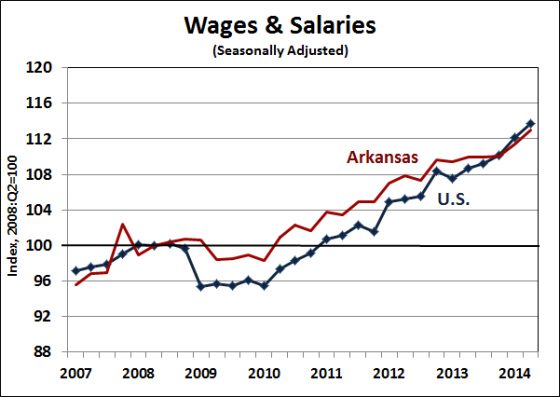 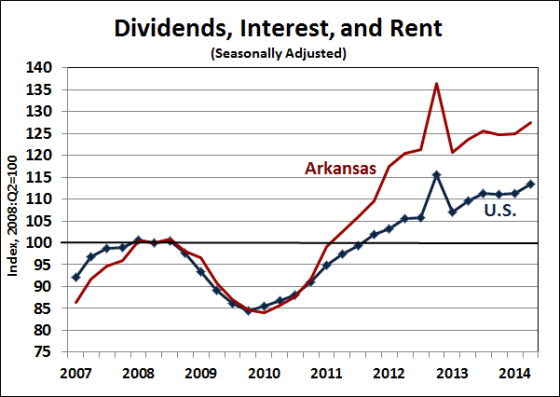 The relative strength of growth in Dividends, Interest, and Rent — in spite of its relatively small share in total income — fully accounts for the fact that Arkansas personal income growth has exceeded the national average during the economic expansion.  The relatively sluggish performance of the Wages and Salaries component highlights the weakness that appears to be holding back the recovery of the state’s labor markets.