Total personal income in Arkansas rose by 1.9% in the first quarter, and is up 4.8% since the first quarter of 2010.  The latest report on state personal income shows that income growth in Arkansas was slightly above the national average rate of 1.8%, ranking 16th among the 50 states.   However, revisions to the data show that income growth was slower than initially reported in 2010, particularly in the fourth quarter. 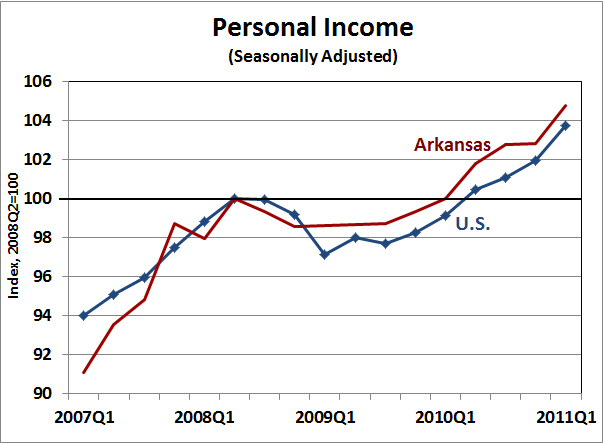 A careful comparison of the figure above with a previous version of the same chart  reveals that income growth in Arkansas is not outpacing the U.S. as much as previous data had suggested.  The slow income growth in the fourth quarter, in particular, represents a sharp downward revision to previously-published data.  As shown in the table below, Arkansas income growth was revised downward in each of the four quarters of 2010. 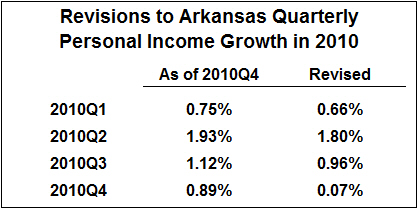 The report from the Bureau of Economic Analysis points out that a large share of the income growth in the first quarter is attributable to a two percentage-point decline in the Social Security payroll tax rate.  This tax cut, applicable to calendar-year 2011, was part of the Tax Relief, Unemployment Insurance Reauthorization, and Job Creation Act of 2010 (i.e., the December political compromise that extended the Bush-era tax cuts, among other things).  For Arkansas, the Social Security tax cut accounted for approximately 0.8 percentage points of the 1.9% personal income growth rate.  Wage and Salary earnings accounted for 0.6 percentage points, with the remaining growth attributable to Dividends, interest and rent (0.44 percentage points); and Personal current transfer receipts (0.15 percentage points).

A breakdown of earnings by industry (which does not include that effects of the Social Security payroll tax cut) is shown in the table below. 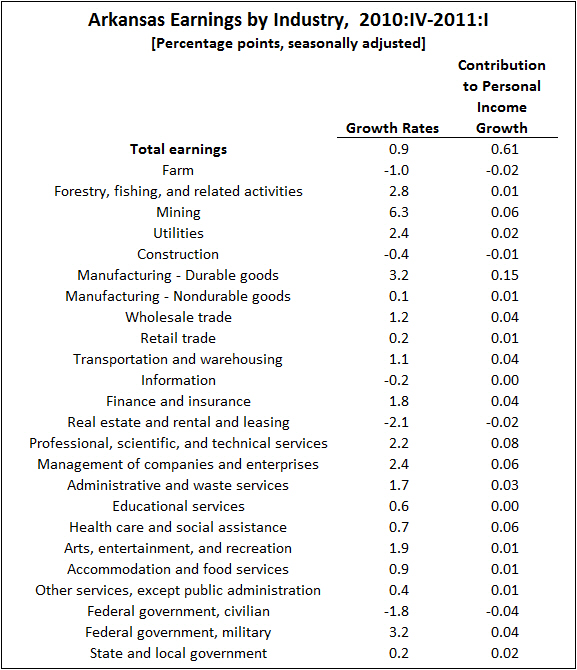 Sectors showing the strongest growth in the first quarter included Mining and Durable goods manufacturing (which were among the strongest sectors nationwide).  Earnings showed negative growth in a handful of sectors, including Farm income, Construction, Information services and Real Estate.  The BEA reports that Farm income in agricultural states varied widely, depending on the mix of agricultural products in each state.  “Farm income in some states, such as North Dakota, benefited from surging global wheat demand (which raised prices in the U.S. 18 percent in the first quarter) while farm income in other states, such as Iowa, plummeted because of rising livestock expenses and falling production.”  Farm income in North Dakota was up 66.6%, while farm income in Iowa was down 15.1%.  Arkansas farm income fell between these extremes.