The latest monthly home sales figures from the Arkansas Realtors® Association (ARA) have appeared to be rather volatile.  Compared to the previous year, sales were up 13% in January, down 6% in February, then down 15% in March.   These swings prompted Amy Glover Bryant, Director of Communications for the ARA, to characterize the market as “something of a roller coaster ride.”  Interpreting the data are complicated  by seasonal patterns and the delayed effects of the home-buyer tax credits in 2009 and 2010.

Home sales follow a recurring seaonal pattern, with sales strong during the summer months and slow during the winter.  Consequently, month-to-month comparisons of raw sales data are dominated by seasonal effects, with little information about business cycle fluctuations or longer term trends.  The appropriate measure for tracking such data is the year-over-year comparison that has recently yeilded such variable readings.   To properly interpret year-over-year data, however, it is necessary to keep track of special factors that were influencing the market 12 months ago.  For several months now, the Federal government’s home-buyer tax credit programs have been relevant for that evaluation.

As shown in the figure below, year-to-year changes for January, February and March of 2011 are guaged against sales figure for 2010 that lie between the tax-credit expiration dates of November 2009 and April 2010.  January is typically the slowest sales month of the year, and last year it was also effected by the slowdown that immediately followed the November 2009 tax credit expiration.  Sales began to pick up in February and March as the second tax-credit program ramped up toward a peak in April.  These developments have effected year-over-year comparisons just as much (if not more than) the sales figures for 2011. 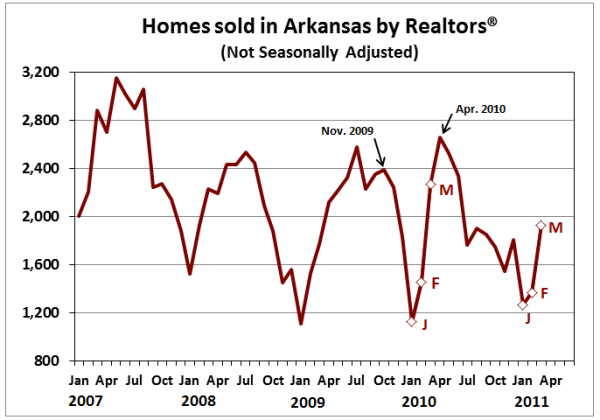 Another way to disentangle the seasonal fluctuations from underlying cycles and trends is to use statistical methods to “seasonally adjust” the data.  The transformed, seasonally-adjusted data provide an estimate of the sales pace for each month under the counterfactual assumption that home sales are distributed evenly throughout the year.   After the purely seasonal components are removed, it is legitimate to make month-to-month comparisons, or to compare different points throughout the year.  The figure below shows the Arkansas home sales data, after seasonal adjustment. 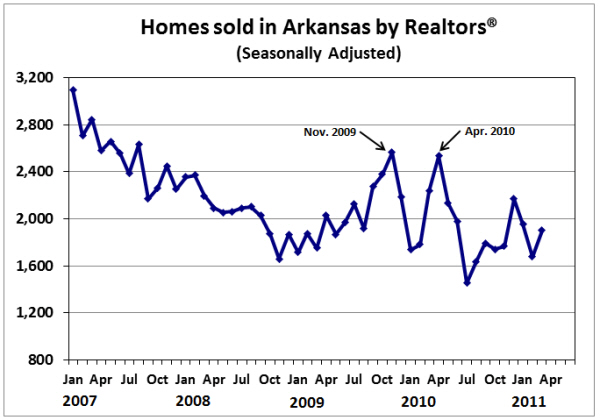 After seasonal adjustment, the two sales peaks associated with the end-dates of the home-buyers’ tax credits are clear.  Each peak is followed by a sharp drop in sales.  Since the expiration of the second program last year, sales languished — but have begun to recover, slowly.

In addition to the monthly data from the ARA, the National Association of Realtors® (NAR) publishes quarterly, seasonally-adjusted sales figures for each state.  The methodologies for collecting and processing the data differ between these two sources, so it is interesting to compare their implications.  The figure below presents such a comparison, with each series normalized to equal 100 at the start of 2009.  Both series show the sales peaks associated with the home buyers’ tax credits, and both indicate a slow, uneven recovery since the drop-off in 2010:Q3.  The NAR data show a slight increase in 2011:Q1 compared to the previous quarter, while the ARA data show a slight decrease. 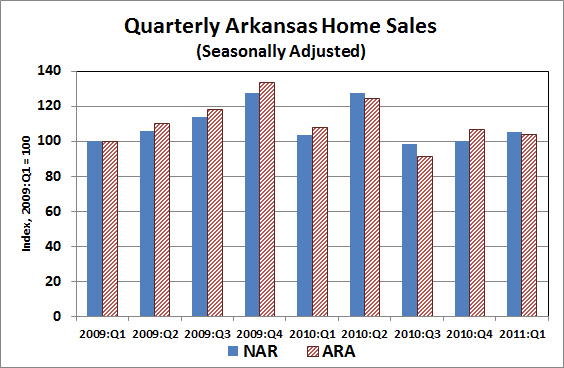 The trends are not clear enough to make any unambiguous projections.   But when it comes to the monthly data releases from the ARA, April 2011 is almost certain to  represent a sharp decline from the previous year.  Similarly, July 2011 (typically the highest sales month of the year) is almost certain to be higher than July 2010.  When those figures are released, however, it will say more about what happened in 2010 than what is happening today.