This morning, the Arkansas Realtors® Association (ARA) released data on Arkansas home sales for December 2010.  As illustrated in the chart below, 2010 was an unusual year for home sales.  The typical seasonal pattern features a peak around mid-summer (usually in July), with a low point during the winter months (usually in January).  In 2010, the summer peak came early–in April.  Sales during the summer months were uncharacteristically low. 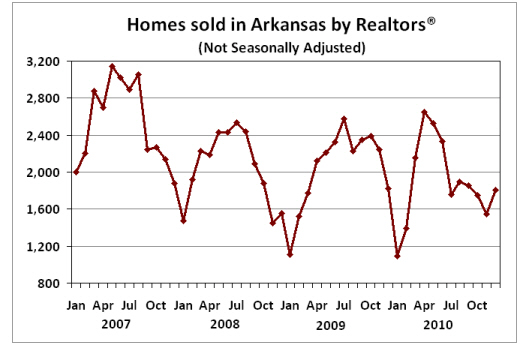 The reason for this unusual pattern was the timing of Federal tax credit programs for home buyers.  The second round of credits–which were available for first-time and repeat home buyers–expired at the end of April 2010.  Typical delays in the closing process meant that some qualifying sales were not officially recorded until May or June, helping to support sales figures for those months.  The subsequent collapse in sales during the late summer and autumn of the year is a reflection of the demand that was shifted forward by the tax credit program:  Some households that would have purchased later in the year accelerated their plans to take advantage of the incentive program.  The sales pattern induced by the timing of the tax credit program is even more apparent when the sales data are seasonally-adjusted, as shown in the figure below: 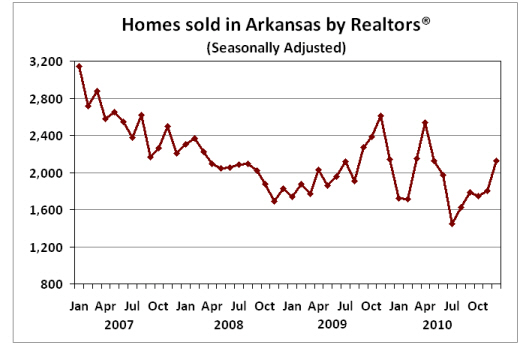 (The previous sales peak that is evident in the seasonally-adjusted data coincides with the conclusion of the original first-time home-buyers’ tax credit in November 2009.)

The December 2010 figures that were released this morning show that sales continue to recover from their low point in July.  The outlook for 2011 depends crucially on how quickly market conditions will return to “normal”–that is, how long it takes for the effects of policy-induced demand shifts to disippate.  The fact that seasonally-adjusted sales during the latter part of 2010 steadily improved suggests that the process of adjustment is taking place fairly rapidly.  Indeed, the sales figures for December 2010 are only slightly lower (-0.88%) than the previous year.

Overall, sales during 2010 were down 4.8% from the previous year.  The home-buyer tax credit appears to have shifted demand from the second half of the year to the first half, with little evidence of an impact on total annual sales.  As the tax credit program recedes further into the past, home sales during 2011 should increasingly reflect current market conditions rather than the delayed effects of special policy factors.