The final employment report for 2010 was released this morning by the U.S. Bureau of Labor Statistics and Arkansas Department of Workforce Services.   The data for the month of December were rather unremarkable.  However, with preliminary data now available for all of 2010, some interesting trends are apparent.

The unemployment rate in December was 7.9 percent — unchanged from the previous month.  The household survey showed that there were nearly 1,300 newly unemployed Arkansans, with unemployment reaching a new record-high of 107,755.  However, the number of employed rose by more than 6,000.   Hence, for the third consecutive month, Arkansas overall labor force expanded.  Since September, the labor force has increased by 18,000,  after declining by 37,000 over the first nine months of the year.  As job opportunities improve (particularly in comparison to other states), new workers are entering the state and unemployed Arkansans who had become discouraged in their job searches are re-entering the labor market.   The entrance of previously discouraged workers places upward pressure on the unemployment rate, even as employment expands.  But even at the elevated level of 7.9%, the state’s unemployment rate remains well below the U.S. average. 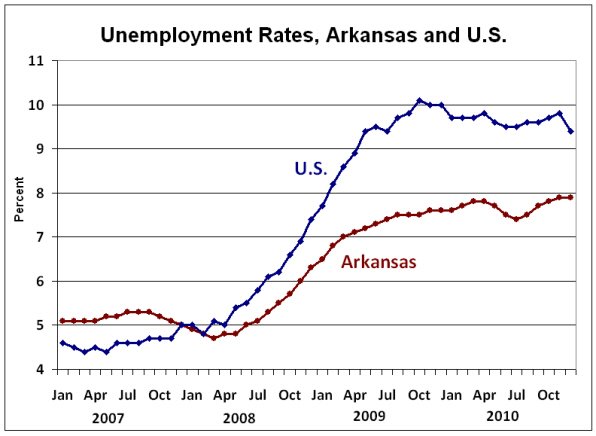 The payroll survey showed a seasonally-adjusted employment decline of 2,500 in December.   Sectors showing job losses included Manufacturing (-1,000), Trade, Transportation and Utilities (-1,900) and Other Services (-2,500).  Employment increased in some service sectors, including Professional and Business Services (+2,400), Education and Health (+400), and Financial (+200). 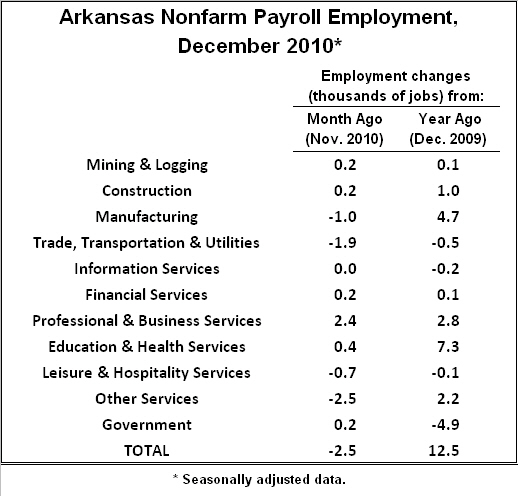 For the year, employment increased by 12,500.   Although this increase is not particularly large (representing less than 1 percent of the state’s labor force), it represents a turnaround from the previous two years.  Total employment declined by 18,400 in 2008 and by 35,000 in 2009.   Employment growth in 2010 therefore represents a replacement of about 23 percent of the jobs lost during the recession and its immediate aftermath.