The Arkansas Realtors® Association (ARA) announced this morning that home sales in September were up approximately 10.3 percent from a year earlier.  In recent months, we’ve seen substantial year-over-year increases in home sales.  In part, this is attributable to the fact that sales in the second half of 2010 were exceptionally weak.  Following the expiration of the Federal home-buyer’s tax credit programs in April 2010, the housing market experienced something of a “hangover” effect with monthly sales figures dropping to record lows.  Nevertheless, increases in home sales over the past three months suggest that the market is slowly improving.

In their press release, the ARA pointed out that “for the quarter (July – September), home sales increased 16 percent.”  As shown in the chart below, this comparison with the previous year partly reflects the low level of home sales in 2010Q3.  Yet the quarterly tracking of sales since then (after seasonal adjustment) reveals an ongoing upward trend.  As we move further beyond the post-tax-credit hangover, ongong strength in housing sales is to be expected. 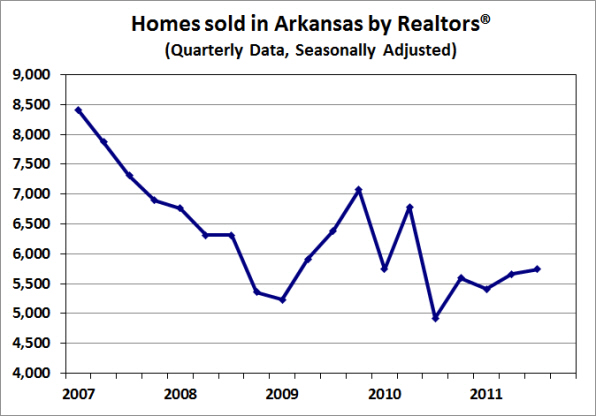