Arkansas GDP During the Pandemic

State-level GDP data for the third quarter were released over the holidays (December 23).  The latest data showed that Arkansas Real GDP increased 7.1% in Q3 (an annual rate of 31.8%).  The nationwide growth rate was 7.5% (annual rate 33.4%).  The change in real GDP was positive for all 50 states plus the District of Columbia, with annual growth rates ranging from 52.2% in Nevada to 19.2% in D.C. It was generally the case that states that had experienced the largest downturns in the first half of the year rebounded to have higher growth rates in the third quarter. 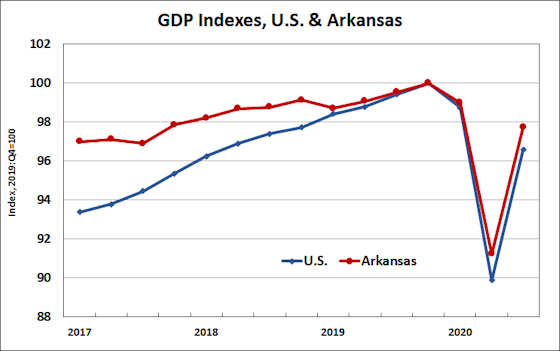 The table below decomposes the changes during 2020 by major industry sector for Arkansas and the U.S.  In many of the most pandemic-sensitive sectors (e.g. Accommodation and Food Services) the declines over the first half of 2020 were smaller in Arkansas than the U.S. average.  For most sectors, the third-quarter recovery brings Arkansas closer to pre-pandemic production levels.  In some sectors, Arkansas GDP growth has moved into positive territory, with total Q3 output above levels of 2019:Q4. 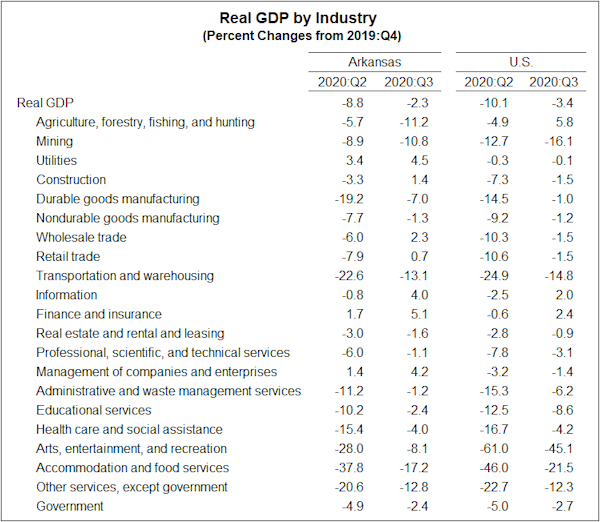 Although the third-quarter GDP increases represent significant recovery from the economic downturn in the first half of 2020, it is likely that many service-related sectors will remain remain below total capacity for some time as efforts to control the COVID-19 pandemic continue.