The pace of recovery in Arkansas labor markets showed clear signs of slowing in November, following similar patterns as the national data released two weeks ago.  Today’s news release from the Bureau of Labor Statistics reported that Arkansas’ unemployment rate was unchanged from October, remaining at 6.2%.  The national unemployment rate declined only 0.2% for the month, falling from 6.9% to 6.7%. 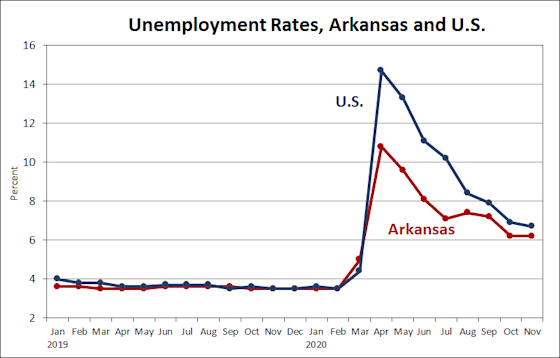 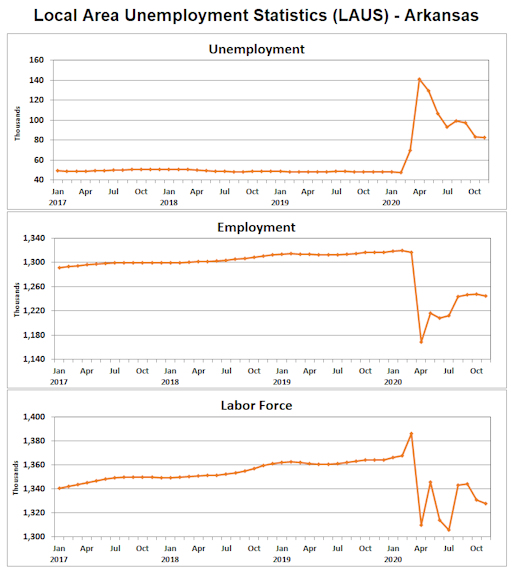 Volatility in the labor force data reflects the difficulty of measuring rapidly changing employment conditions that have prevailed in 2020.  From the early stages of the pandemic through the summer recovery months, labor flows were particularly fluid, with the data suggesting that people were moving between employment and unemployment, as well as in and out of the labor force, at an unprecedented pace. As that pace has slowed, the data are suggesting that labor force participation is down by about 35,000 from a year earlier.  In terms of labor force participation rates, Arkansas has fallen to 56.3%, down 1.9 percentage points from February.  Over the same period, the net change in the U.S. participation rate has also been -1.9 percentage points. 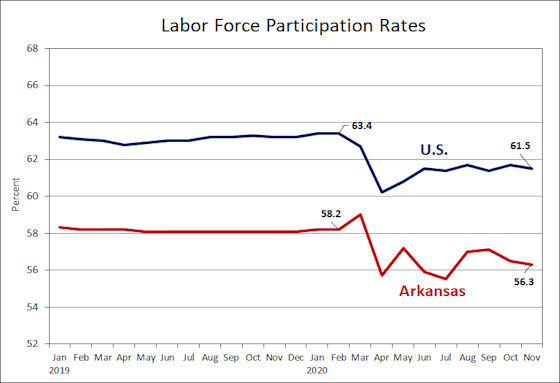 Payroll Employment
Nonfarm payroll employment increased by 4,500 in November (seasonally adjusted).  Job growth continues, but at a slower pace than during the initial stages of economic rebound.  After seven months of recovery from the April 2020 employment trough, Arkansas payroll employment remains 3.2% below its pre-pandemic level in February.  Nationwide, the net change from February through November was 6.5%.  As of November, U.S. employment has now recovered over half of the jobs lost from February through April, while the recovery in Arkansas has amounted to nearly two-thirds of the initial job-losses. 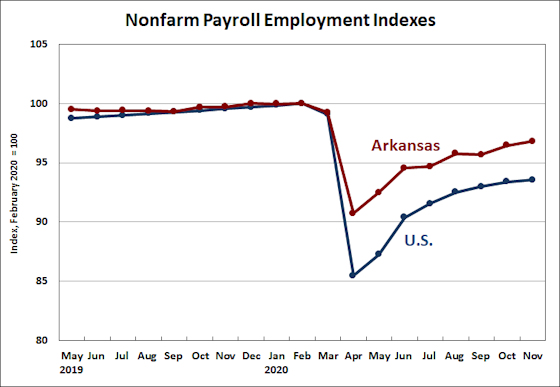 Breaking down the employment data by sector, we see that ongoing employment declines are concentrated in sectors directly affected by economic shut-downs and social-distancing limitations,  Education and Health Services, Leisure and Hospitality Services and Other Services account for the bulk of net job losses during 2020.  Government employment is also down, primarily associated with lower employment by public schools, colleges and universities.  Manufacturing employment has also been slow to recover but showed a relatively strong increase in November.  The list of sectors in which employment has fully recovered to pre-February levels include Construction, Wholesale and Retail Trade, Transportation & Utilities, and Professional & Business Services. 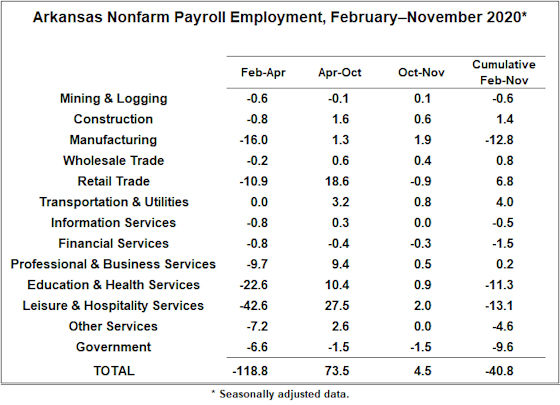 The concentration of ongoing job losses in the service sectors suggests a simple explanation for the recent slow-down in employment recovery both in Arkansas and nationwide:  Many service-related businesses continue to operate well below capacity, due to both formal and informal restrictions to encourage social distancing. As long as those sectors are operating under such constraints, the extent of full recovery is limited.  Businesses have been extraordinarily innovative during the pandemic, but there so far we can proceed to getting the economy back to “normal” until we are able to put the COVID-19 pandemic, and efforts to control it, behind us.