New data from the Bureau of Labor Statistics and Department of Workforce Services show the Arkansas unemployment rate unchanged in October.  The reported uptick from 7.1% to 7.2% was essentially a rounding error (literally — taken to the next decimal place, the rate changed from 7.14% to 7.16%).  Since April of this year, the Arkansas unemployment rate has been stuck in a range of 7.1% to 7.3%. 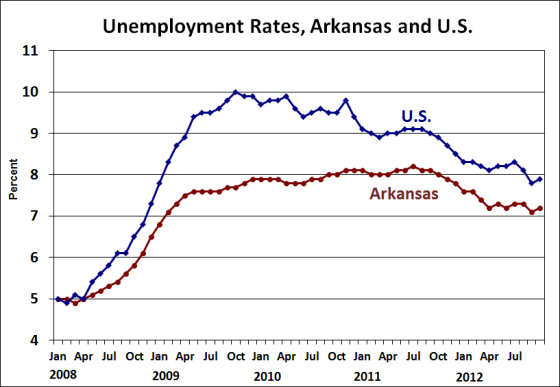 When the unemployment rate was declining in late 2011 and early 2012, total household employment and labor force participation were rising.  Since April, however, both measures have been trending downward with the number of employed falling by 15,700.  Nevertheless, household employment remains over 10,000 higher than a year ago, and is up over 20,000 compared to July 2011. 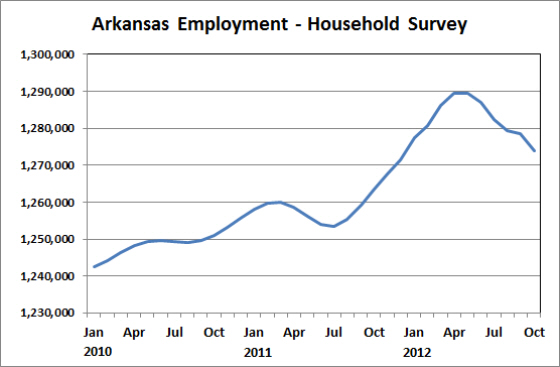 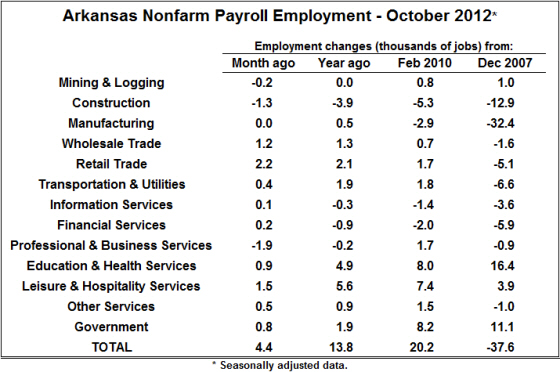 The current data are showing a year-over-year increase in payroll employment of 13,800 jobs, with strong growth in Leisure & Hospitality Services and Education & Health Services.  As discussed in a recent post, however, the payroll data for 2011 and early 2012 are expected to be revised upward significantly.  As shown in the figure below, the expected revisions raise the path of payroll employment growth by over 13,000 by the third quarter of 2012. 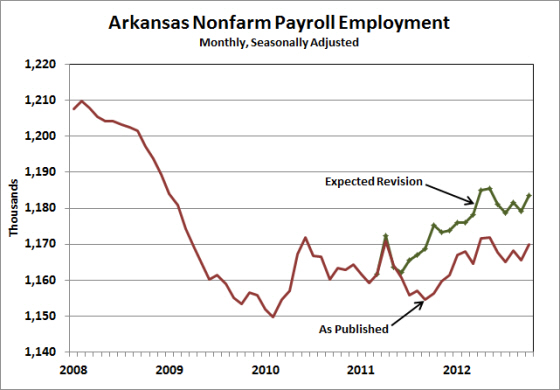 When the revisions are complete, the largest single-month change will be for October 2011–up by 19,000.  With recent monthly observations expected to be revised upward by only 13,600, the revised data will actually show a smaller year-over-year change in employment than currently-published data.  As shown in the table below, the revised data are expected to show a net employment gain of 8,400 from October 2011 through October 2012.  The expected revisions have more significant implications for longer-term measures of employment growth:  The data revisions suggest job growth of 33,800 since February 2010, compared to an increase of 20,200 using currently-published data (see table above).  With recent job gains and expected data revisions, Arkansas is now only 24,000 jobs short of re-attaining the state’s pre-recession level of employment (as of December 2007).