Arkansas’ unemployment rate remained unchanged at 4.0% in October.   The underlying data from the household survey shows that the number of employed Arkansans declined for the 5th consecutive month, falling by 1,805.  The number of unemployed fell slightly (-368) after rising in the previous four months. 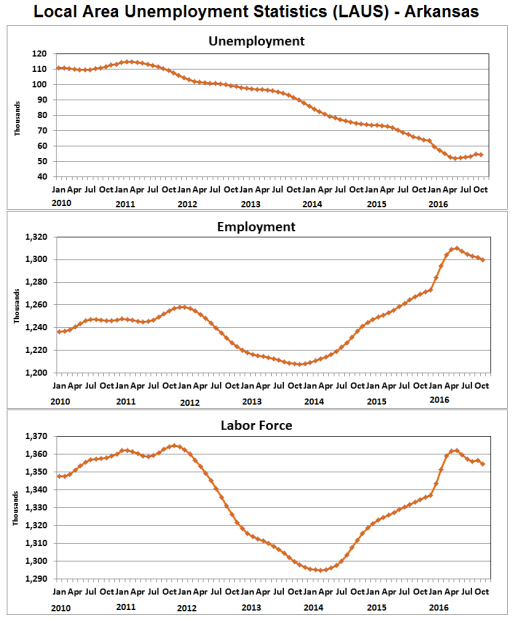 Payroll Employment
Arkansas nonfarm payroll employment increased by 300 in October (seasonally adjusted).  An increase of 1,700 jobs in Construction employment accounted for a net increase in goods-producing sectors.  Despite a strong increase in Professional and Business Services (+1,700), service-providing sectors contracted from September to Octobers, led by declines in Leisure and Hospitality (-700), Wholesale Trade (-500) and Retail Trade (-1,600).  The concentration of job losses in consumer-related sectors suggests that firms are not scaling up holiday employment as much as in previous years. 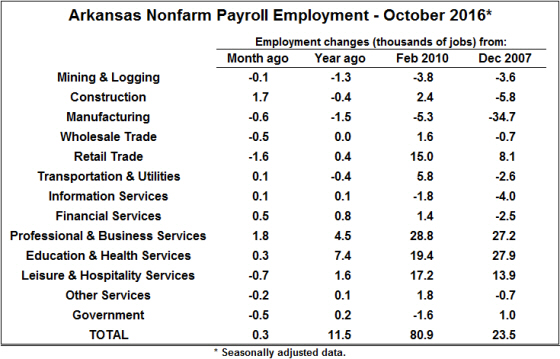 As presented during our Arkansas Economic Forecast Presentation, information from the Quarterly Census of Employment and Wages suggests that the nonfarm payroll data will ultimately be revised downward for the period from 2014:Q2 through 2015:Q1.  Final revisions will not be completed until March 2017 and will include additional data from 2015.   Currently, the total magnitude of the revision is estimated to be approximately 4,800 jobs (about 0.4%), with the revisions concentrated in the second half of 2015. 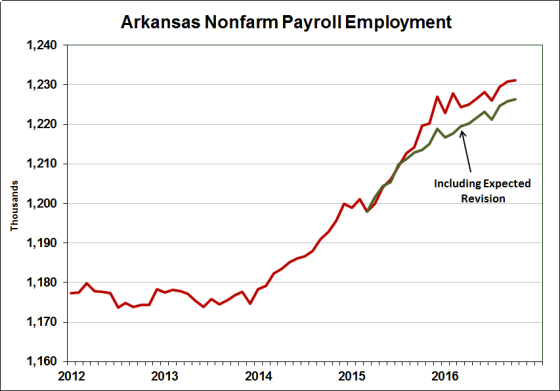 Sources: Bureau of Labor Statistics and the Institute for Economic Advancement

The table below breaks down the expected revisions by sector.  Employment in goods producing sectors is expected to be revised upward, while service-sector job growth will generally be revised lower (with the exception of Financial Services).  Overall job growth for the period December 2014 through October 2016 is presently estimated to be 31,200 (2.6%), but our projections of future data revisions indicate that growth rate for that period will total 26,400 jobs (2.2%). 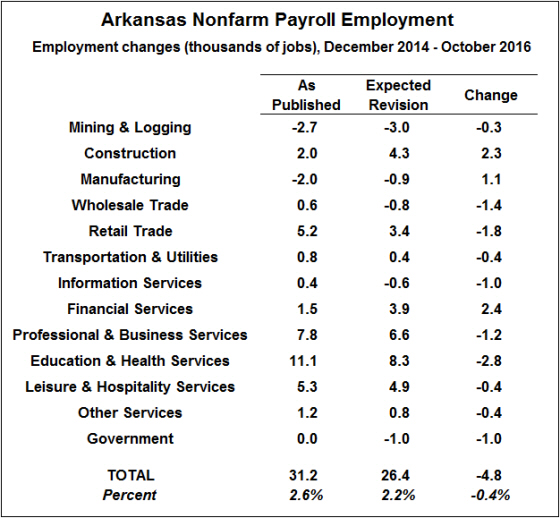 Sources: Bureau of Labor Statistics and the Institute for Economic Advancement