After declining during the first half of the year, Arkansas Taxable Sales (ATS) rose 2.2% in the third quarter of 2016.  On a year-over-year basis, taxable sales were up 1.3% from the third quarter of 2015.  Gasoline sales also rose in the third quarter (+1.6%), despite a slight reduction in the average price of gasoline in Arkansas.  As a result, Arkansas Taxable Sales Including Gasoline (ATSIG) also rose by 2.2% from the second quarter to the third.  Over the past four quarters, ATSIG has increased by 0.6% while gasoline prices have fallen from $2.28/gallon in 2015:Q3 to $1.985 in the most recent quarter. 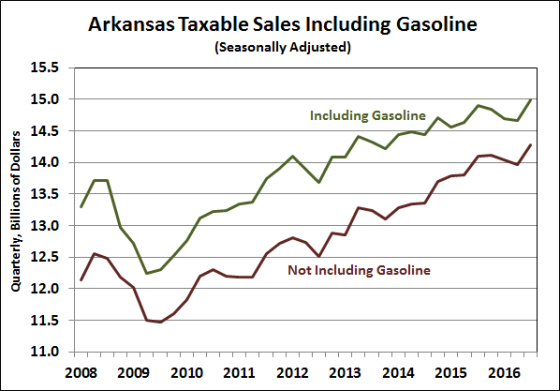 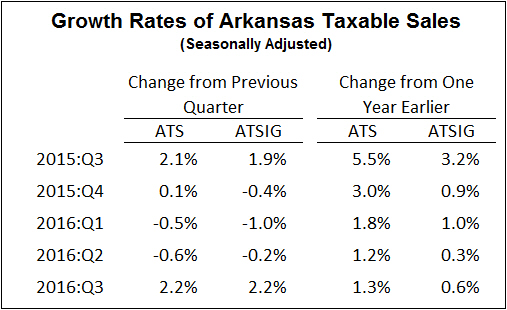 From the trough of the recession (2009:Q2) through the third quarter of 2016, ATS has grown at an average rate of 3.0%.  With gasoline expenditures falling at a 2.1% annual rate over the same period, ATSIG has increased at a 2.8% rate.  As measured by the price index for personal consumption expenditures, inflation has averaged 1.5% over the 7-year expansion, so that real (inflation adjusted) measures of ATS and ATSIG have grown at rates of 1.5% and 1.3%, respectively.

As shown in the final figure below, gasoline prices are at about the same level as at the trough of the recession–around $2/gallon.  However, spending on gasoline as a percent of total taxable sales has fallen to less than 5%, down from around 6% in 2009.  Although expenditures on gasoline have increased over the past 7 years, lower gas prices have allowed for spending on non-fuel items to increase as a share of total expenditures. 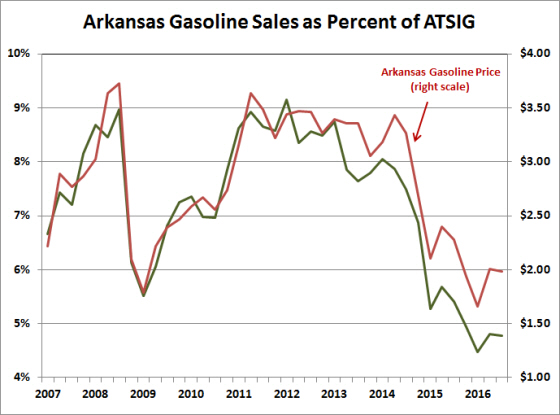 Arkansas Taxable Sales (ATS) is calculated by the Institute for Economic Advancement to serve as a timely proxy for Arkansas retail sales. The series is derived from sales and use tax data, adjusting for the relative timing of tax collections and underlying sales, changes in tax laws, and seasonal patterns in the data.  Arkansas Taxable Sales Including Gasoline (ATSIG) incorporates data on the state motor fuel tax and gasoline prices from the Oil Price Information Service. A spreadsheet of the monthly and quarterly data is available here: Arkansas Taxable Sales 2016:Q1 (Excel file).