The unemployment rate in Arkansas dropped one tenth of a percentage point to 8.2 percent in October.  According to data from the Bureau of Labor Statistics (BLS) and the Department of Workforce Services (DWS), the number of unemployed Arkansans fell by 663 (seasonally adjusted), the first monthly decline since May.  The data from the household survey also showed that the number of employed rose by 7,424.  Arkansas was one of  36 states to see a drop in the unemployment rate in October, but one of only 8 states with an unemployment rate higher than one year earlier. 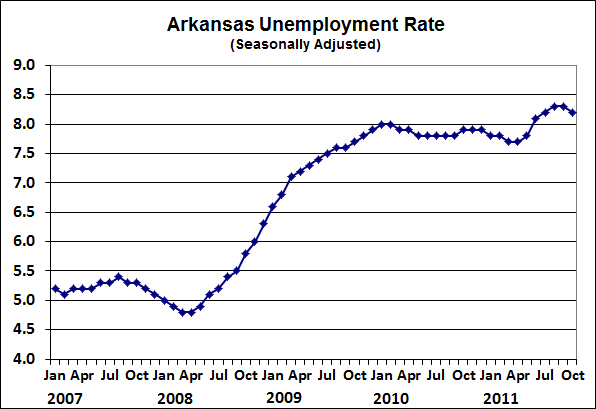 The separate payroll employment report showed an increase of 1,000 jobs for the month (seasonally adjusted).  However, total employment in October was down 1,300 from a year earlier, and 8,500 below the recent peak employment recorded in April 2011.  Month-to-month changes showed declines in good-producing sectors, with Construction down by 500 and Manufacturing down by 1,500.  Employment in Trade, Transportation and Utilities was also down sharply.  With the exception of Information Services, all service-sector categories showed increases in October.  As noted in the news release from DWS, not-seasonally-adjusted data for Education and Health Services and Local Government showed increases associated with back-to-school effects.  Nevertheless, these categories also experienced employment increases after accounting for this recurring seasonal pattern. 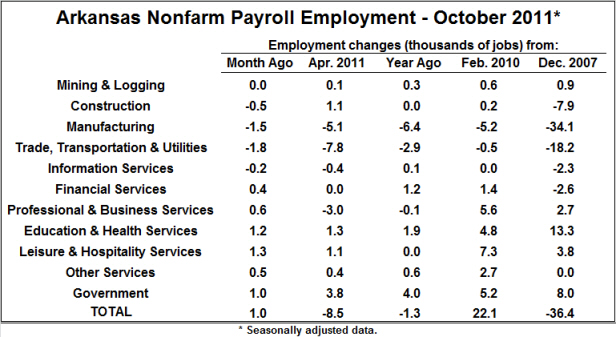 As previously reported on the Arkansas Economist, the payroll data are subject to annual benchmark revisions that will be completed in March 2012.  Based on available data from the Quarterly Census of Employment and Wages (QCEW), the benchmark revisions are likely to show sharply lower job growth for the fourth quarter of 2010 and the first quarter of 2011.  Consequently, the total level of employment for all subsequent months (including October) are likely to be revised downward by about 10,000 jobs (+/- 2,000).