The latest monthly revenue report from the Department of Finance and Administration indicated another slow month for sales tax collections in October (corresponding to transactions in September).  Nevertheless, strength in the previous month propelled the non-gasoline component of Arkansas Taxable Sales to a healthy increase of 1.8% in third quarter (seasonally adjusted).*  And despite a decline in gasoline prices relative to the second quarter, gasoline expenditures rose by 3%.  Overall, Arkansas Taxable Sales Including Gasoline (ATSIG) rose by 1.9%. 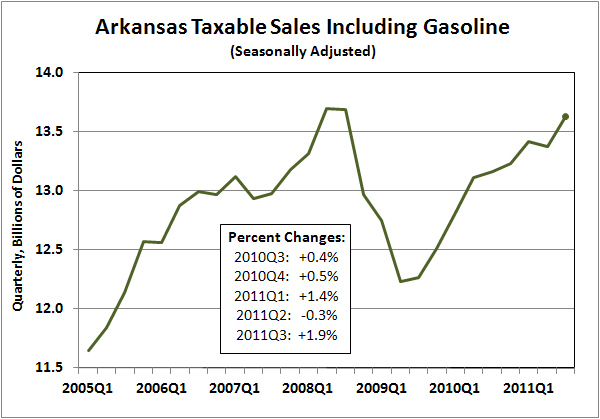 The third-quarter increase in ATSIG represents a wecome recovery from the decline recorded in the second quarter.  And in fact, growth in the previous two quarters would have been slower had it not been for higher gasoline expenditures associated with a price spike.  The third quarter growth rate appears to indicate a resurgence of growth after a year-long slowdown.

Relative to U.S. Retail Sales, the third quarter increase in ATSIG also represents an improvement (see chart, below).  Arkansas had fallen behind in the pace of overall sales growth during late 2010 and early 2011, but the 1.9% increase in the third quarter exceeded the U.S. growth rate of 1.1%. 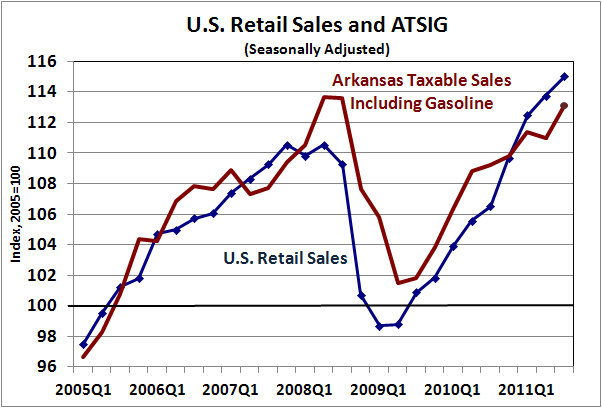 One important caveat to the third quarter figures should be mentioned:  The totals for ATSIG do not include tax-exempt expenditures associated with the new back-to-school sales tax holiday in August.  Information is sketchy on the magnitude of this sales surge.  But if DF&A estimates are correct,  August sales were actually about 1% higher than implied by the sales tax data.  This corresponds to a 0.3% increase in quarterly growth, raising ATS growth in the third quarter to over 2%.

Arkansas Taxable Sales (ATS) is calculated by the Institute for Economic Advancement to serve as a timely proxy for Arkansas retail sales.  The series is derived from sales and use tax data, adjusting for the relative timing of tax collections and underlying sales, changes in tax laws, and seasonal patterns in the data.  Arkansas Taxable Sales Including Gasoline (ATSIG) incorporates data on the state motor fuel tax and gasoline prices from the Oil Price Information Service.

* Data are preliminary until the release of the DFA report, Arkansas Fiscal Notes for October 2011, and will be updated when information becomes available.