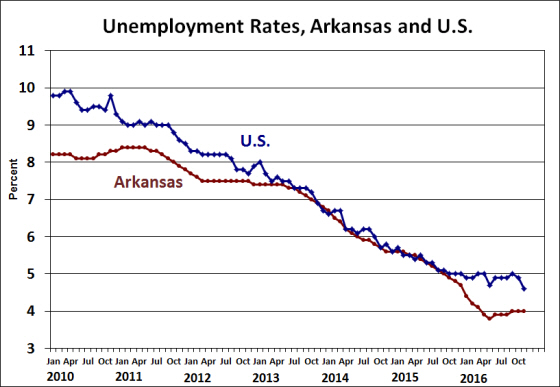 For the sixth consecutive month, the labor force data show a decline in the number of employed Arkansans (-3,929), reinforcing the evidence from the payroll survey that employment growth has slowed during the year (see below).   On the other hand, the number of unemployed was also down in November (-1,130), following a revised decline (-277) in the previous month.  As a result of the lower numbers for both employment and unemployment, the labor force was down sharply in November (-5,059). 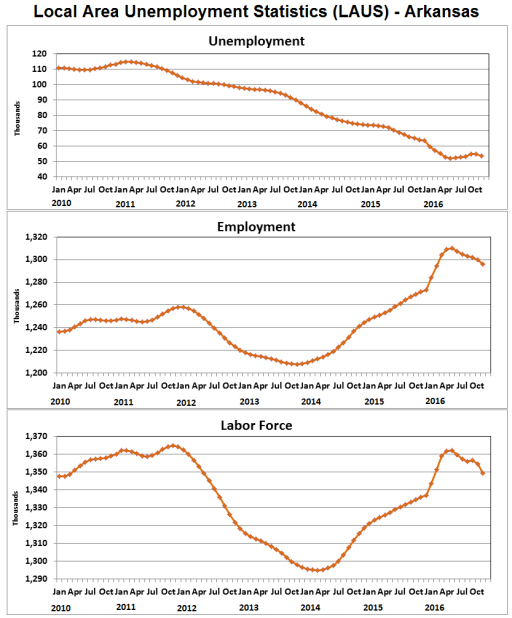 Payroll Data
Nonfarm payroll employment declined by 2,000 in November (seasonally adjusted).  The sector experiencing the largest decline was Retail Trade, down 3,400 from the previous month and down 2,400 from November of 2015.  Seasonal factors are likely at play here:  With internet sales comprising a larger proportion of holiday shopping, the seasonal increase in retail hiring has been slower than in previous years, resulting in a seasonally-adjusted decline and a year-over-year decline.

Professional and Business Services continues to be the strongest performing sector, both nationally and here in Arkansas.  Meanwhile, employment in the Education and Health Services sectors has recently shown signs of slowing.  Over time, these two service-providing sectors (Professional and Business, Education and Health) continue to be the engines of growth in the state’s employment.  Each has contributed 5,800 new jobs over the past 12 months, with all other sectors collectively showing a net decline of 2,800 jobs. 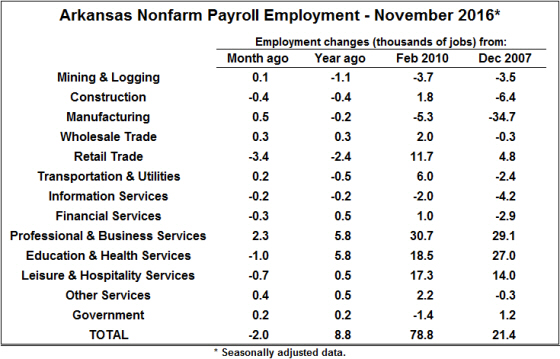 Projected Data Revisions
The BLS recently released second quarter data from the Quarterly Census of Employment and Wages, which provides a more accurate assessment of payroll employment than the Current Employment Statistics.  Based on this new information, our projection for upcoming revisions of Arkansas payroll employment data has been revised further downward.  As of today’s report, we now expect the downward revision to total about 9,500 jobs.  The data revisions primarily affect the first half of 2016, so after expected revisions we now expect that the November 2015 to November 2016 change in employment will total only 5,800 after revision, compared to 8,800 in the currently reported statistics.  (The revised data will not be officially available until March 2017). 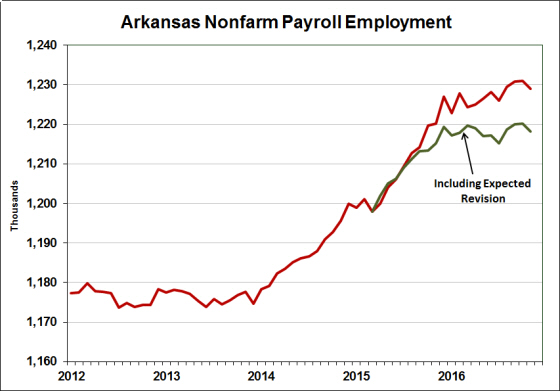 Sources: Bureau of Labor Statistics (CES, QCEW) and calculations by the Institute for Economic Advancement