The Bureau of Economic Analysis announced this morning that Arkansas’ Gross Domestic Product (GDP) increased at a seasonally adjusted annual rate of 1.6% in the second quarter of 2016, following a revised growth rate of 4.4% in the first quarter.  Arkansas growth for the quarter exceeded the national average of 1.2%.  Compared to a year earlier, state GDP was up 2.4%. 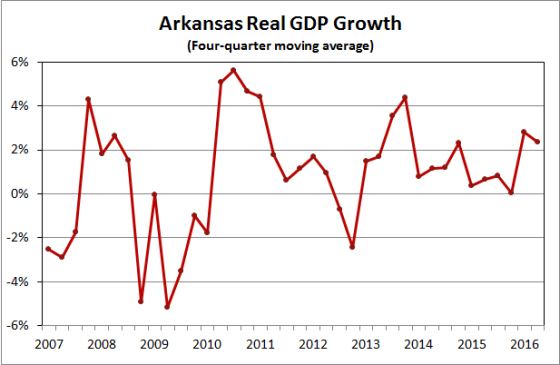 As was the case in the first quarter, Arkansas’ growth rate was boosted by a substantial increase in the category of Agriculture, forestry, fishing and hunting.  Other sectors showing strong growth included Transportation and warehousing, Management of companies and enterprises, and Utilities.  Reflecting continued weakness in natural gas prices, output in the mining sector was once again down sharply.  Other sectors contracting in the second quarter included Construction; Educational services; and Arts, entertainment, and recreation. 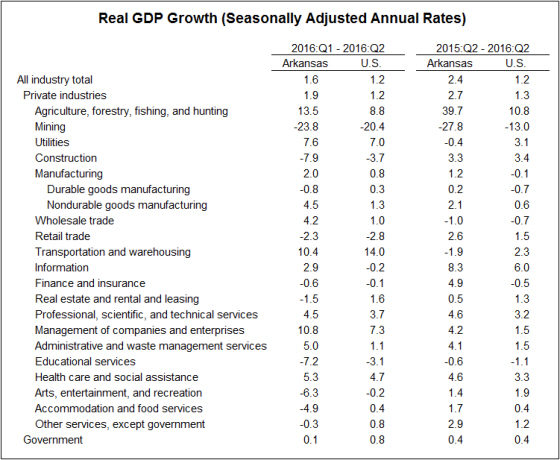 Today’s news release also included revisions to previously published data.  The revised figures show slower growth in Arkansas over the past two years.  On a fourth-quarter over fourth-quarter basis, Arkansas GDP growth was revised from 2.5% to 2.3% for 2014, and revised from 1.4% to 0.0% for 2015. 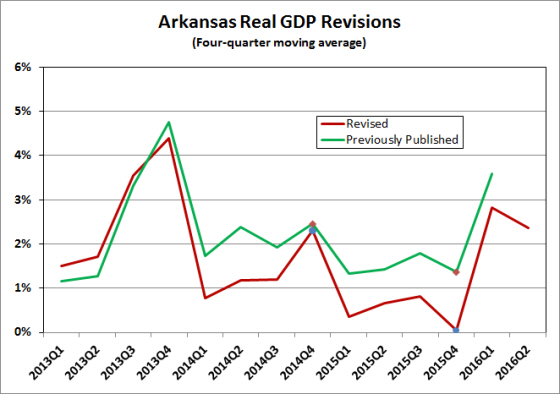 Over the seven year period from the trough of the recession (2009:Q2) through the second quarter of 2016, Arkansas GDP growth has averaged 1.9%.