The latest data on state employment and unemployment shows that Arkansas economy is continuing to recover from the downturn of 2020.  Employment statistics showed gains in March and the number unemployed continued to decline. 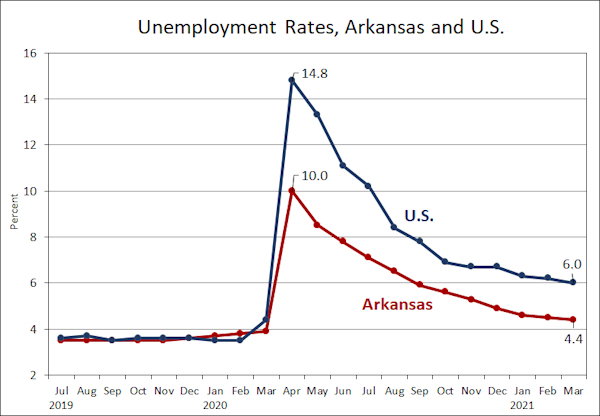 The drop in the unemployment rate reflected the ongoing decline in the number of unemployed, which dropped by 1,400 in March.  The number of employed in the household data also declined in March, as did the labor force.  March represented the third consecutive decline in the labor force, the effect of which has been to reverse some of the unexpectedly large increase reported for December. 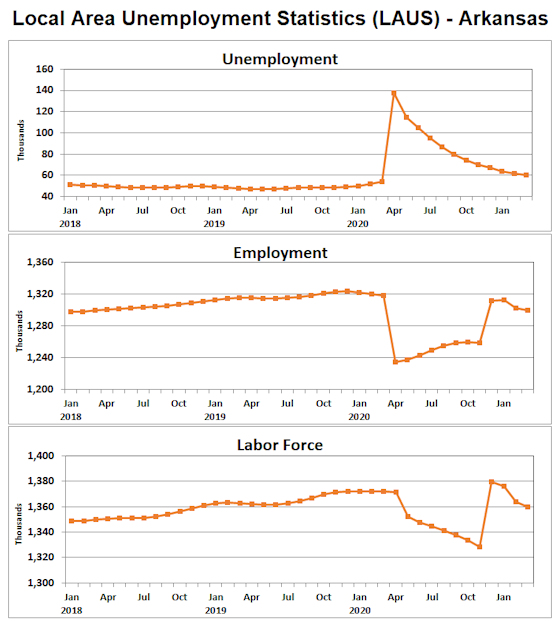 Payroll Employment
Nonfarm payroll employment increased by 3,400 in March (seasonally adjusted)—about 0.3%.  Moreover, the data for February, which originally showed a decline of 3,400 jobs, were revised to show a downturn of only 700 jobs.  The March data showed monthly increases in the goods-producing sectors of Construction and Manufacturing, as well as in several service-providing sectors: Employment in Education and Health Services increased by 1,700, and the categories of Leisure &Hospitality Services and Other Services each saw gains of 600 jobs.  Employment in financial services also registered a health increase of 700 jobs. 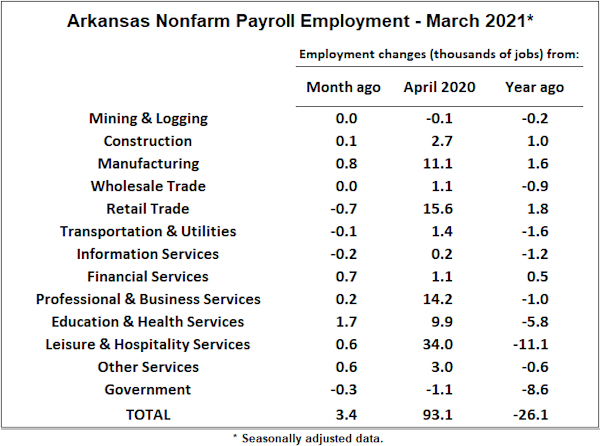 One year ago, we saw the first employment declines associated with COVID-19, with total nonfarm payrolls falling by 4,600 jobs (a modest decline compared to the 122,600 drop that came the following month).  Compared to that nearly-pre-COVID level of employment, several sectors have now seen net increases in employment.  Construction, Manufacturing, Retail Trade and Financial Services all have higher employment levels than in March 2020.  Other service sectors continue to lag, including Leisure & Hospitality Services and Education & Health Services (entirely attributable to Health Care & Social Assistance categories). Overall, the seasonally-adjusted statistics show employment down 26,100 from a year ago—approximately 2.0%.

The figure below compares the downturn and recovery for Arkansas with the U.S. total.  As of March 2021, employment in Arkansas was 2.3% below the employment peak of February 2020, while for the U.S., the net change in employment was -5.5%. 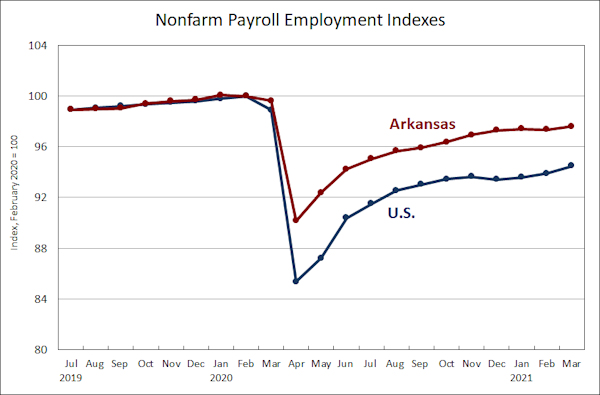