Arkansas’ unemployment rate was unchanged at 3.4% in June.  The national average rate increased by 0.1 percentage point to 4.4% for the month, so the gap between Arkansas and the U.S. has widened to a full percentage point. 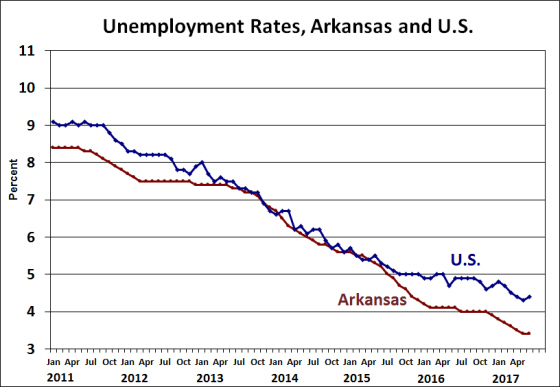 The data series underlying the unemployment rate continued to show movement in a positive direction:  The number of unemployed Arkansans declined by 238 while the number of employed increased by 9,481.  As a result, the labor force increased by 9,243 for the month. 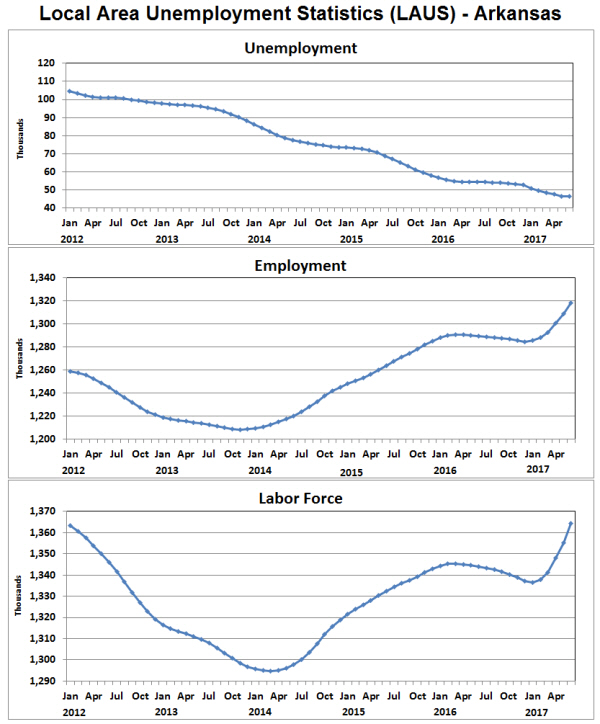 There is reason to believe that some of the recent declines in Arkansas’ official unemployment rate might be overstating the actual fall in unemployment. Since the beginning of 2017, the household survey has shown the number of employed rising at an unprecedented rate — expanding at an annual rate of over 5 percent since December 2016.  Comparing the household data to the payroll survey, it appears likely that this rapid pace of household employment growth will ultimately be revised downward.  As illustrated in the figure below, the employment measure from the household survey has grown by 33.6 thousand over the past six months, while the payroll survey shows job growth of only 12.5 thousand.  Although the two measures of employment have slightly different definitions, they should generally be expected to move together over time.  Of the two, it is typically the household measure that is subject to more substantial annual revision. 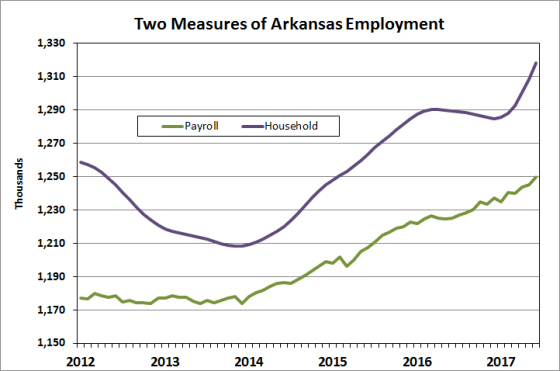 If a downward revision to the household employment data does eventually take place, then the exceptionally low unemployment rate recorded in Arkansas this year would be revised upward.  However, the magnitude of the adjustment to the unemployment rate would be relatively small.  Even taking into consideration the imprecision of the data, Arkansas unemployment rate is statistically significantly lower than the U.S. average.  So in the worst-case scenario, Arkansas’ true unemployment rate is closer to 4% than to 3.5%.  And the conclusion we can draw from examining both data sources is that Arkansas employment has been expanding at a healthy pace for the past 3-1/2 years, with no reason to expect a change in that trend.

Payroll Employment
Turning directly to the payroll survey, Arkansas’ nonfarm payroll employment expanded by 4,700 in June (seasonally adjusted).  The sector recording the largest gains was Leisure and Hospitality Services (+4,200), with most of the gain attributable to Accommodation and Food Services (+3,800).   June is typically a strong month for employment growth in this sector, but the increase in the seasonally-adjusted statistics indicates that the growth was exceptionally strong.  Other sectors adding jobs included Health Services and all sub-categories of Trade, Transportation and Utilities.  Professional and Business Services dropped by 3,000 jobs, with most of the job losses in the category of Administrative and Support Services. 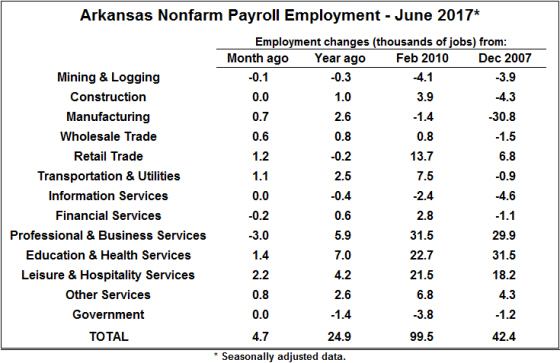 Compared to a year ago, Arkansas payroll employment is up by 24,900 jobs — an increase of 2.0%.  That rate of job expansion puts Arkansas on the list of 33 states that have experienced statistically significant employment increases over the past 12 months.   In fact, Arkansas ranks #14 on that list.  Service-providing sectors are responsible for most of that job growth, but gains of 1,000 jobs in construction and 2,600 jobs in manufacturing have also provided for net growth in goods-producing employment as well.