Arkansas’ unemployment rate ticked downward yet again in July, reaching an all-time low of 3.4%.  June’s record-low reading of 3.5% had been previously recorded in some of the preliminary data for 2018, but was a new low compared to revised figures. The new 3.4% record is the lowest unemployment rate in the history of the time-series—even among previous preliminary estimates.  The rate was driven lower by a continuing decline in the number of unemployed workers—down by approximately 400 in July and down by more than 4,300 over the past five months. Meanwhile, the number of employed was up by 800 in July and after seven consecutive monthly increases the number of employed is up by nearly 2,900 for the year. 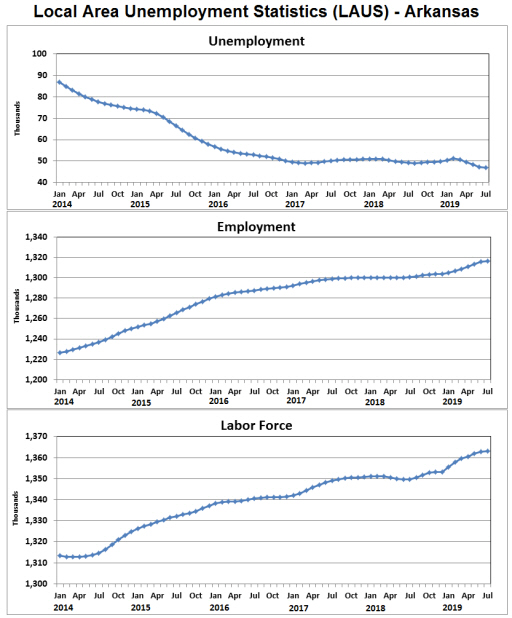 Arkansas’ unemployment rate in July was 0.3% lower than the national rate of 3.7%.  However, given the range of uncertainty in the the data, the difference is not statistically significant. 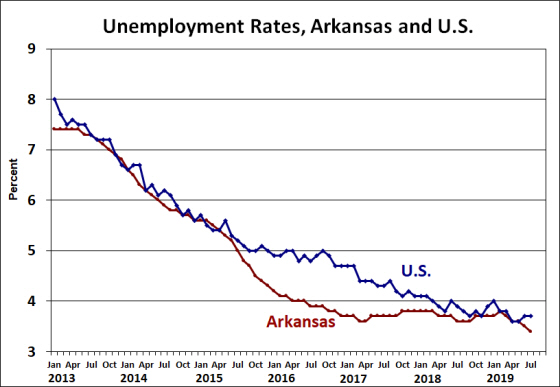 Payroll Employment
Before seasonal adjustment, nonfarm payroll employment dropped sharply in July (-13,900).  However, most of the decline was associated with summer vacation for workers in public and private education.  After seasonal adjustment, total employment was down by only 900 jobs.  Manufacturing and Construction were down for the month, but remain significantly higher than a year earlier.  Service-providing sectors continued their recent, slower trend rate of growth.  The exception was Leisure and Hospitality, which continues to add jobs at a robust rate—up 600 jobs for the month and up 5,000 since July 2018.  One notable weakness was in the Administrative & Support Services component of Professional & Business Services, a component that includes temporary clerical workers.  If demand for new employees were slowing, this component might be one of the first places to show weakness. 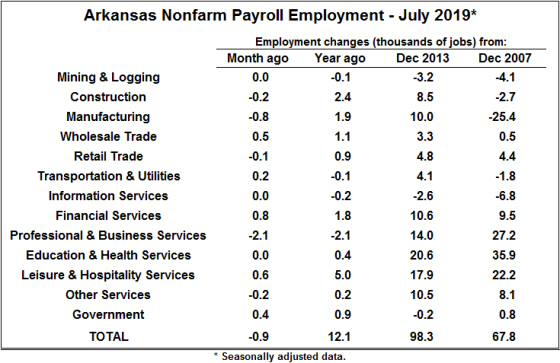