The Arkansas unemployment rate dropped three-tenths of one percent in January to 4.4%.  The decline reflected an increase in the number of employed Arkansans of more than 10,000 and a decline in the number of unemployed by nearly 4,000.  Both the 0.3% decline in the unemployment rate and the 10,000 increase in household employment are not unprecedented, but are unusually large.  We should bear in mind that there is always a margin of error in reported statistics — particularly the initial releases — and month-to-month changes are not necessarily indicative of significant underlying developments.  Nevertheless, the unemployment rate decline and the changes in household employment and unemployment are positive indicators. 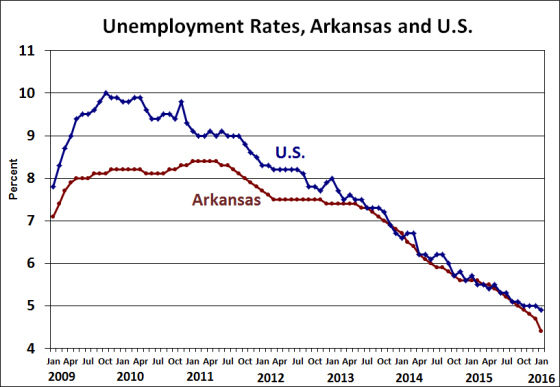 Payroll Employment
In contrast to the large gain in employment from the household survey, nonfarm payroll employment declined by 5,100 in January (seasonally adjusted).  However, the decline followed a December increase of 6,800 (revised), so the net change from November to January was +1,700.  This type of monthly reversal suggests a likelihood that unusual seasonal influences are relevant.  It is normal for employment to rise in December and then drop off sharply in January.  (In fact, the not-seasonally adjusted payroll employment numbers show a decline of 24,500 in January.)  The temporary spike in the seasonally adjusted figures for December-January suggest that seasonal employment increased more than usual in 2015, with the drop-off in January reflecting a return to more normal conditions.

As shown in the table below, the January drop in employment was attributable to declines in several sectors, including Construction, Transportation & Utilities,  Professional & Business Services, and Other Services.  Compared to January of 2015, only two sectors have shown net declines:  Mining and Logging (which has been adversely affected by low energy prices) and Manufacturing. 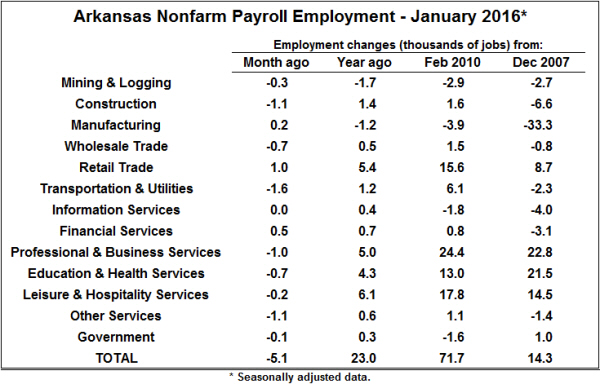 Annual Revisions
With this data release, the BLS released the results of the annual benchmark revisions to the payroll data.  As expected, the revised data show downward revisions to the data for late 2014 and the first part of 2015, with a cumulative adjustment of -8,700 jobs through April 2015.  However, revisions to data from the later part of 2015 reversed those downward adjustments.  By December, the revised data show a net upward revision of +3,100 jobs. 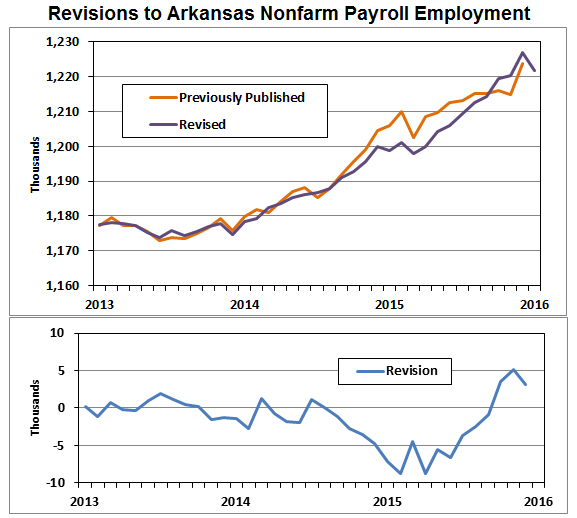 We will report details of the payroll employment revisions by sector and for metropolitan areas in subsequent posts on the Arkansas Economist.