The latest data from the Arkansas Realtors® Association shows a year-end surge in home sales.  Compared to the previous year, home sales were up 19.6% in December.  There is often a year-end uptick in home sales, but the most recent increase was far larger than usual. 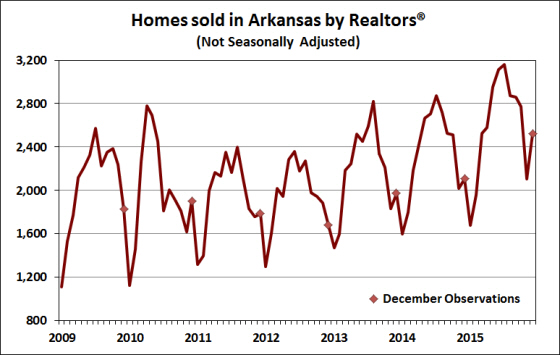 For two reasons, however, this measured increase is probably overstating the trend rate of growth.  First, the previous December was relatively weak, so this December’s growth rate is calculated from a low base.  Second, the timing vagaries of closing dates on real-estate transactions can sometimes result situations where transactions that might have concluded in November were carried over into December — that is, there is often some month-to-month randomness.  The seasonally adjusted data shown below–which strips away some of the predictable seasonal variation — suggest this might have been the case at the end of 2015.   It is November’s relative weakness that stands out as the deviation from the prevailing trend. 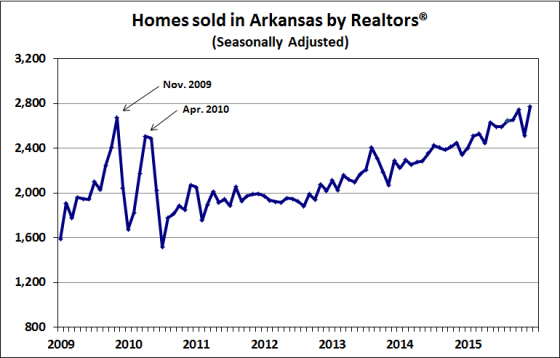 Another way to look past the monthly variability is to consider quarterly-averages.  Year-over-year growth for the entire fourth quarter of 2015 was up 11.6% from the previous year, up slightly from the 10.2% growth rate of the first three quarters of the year. 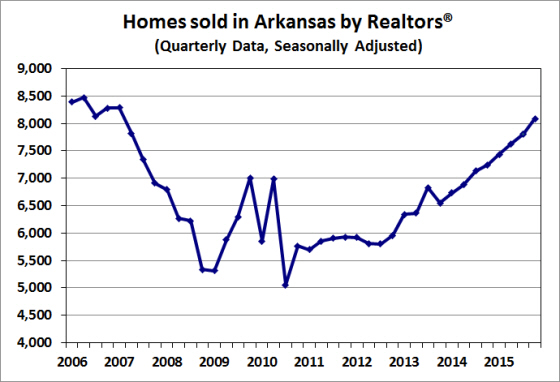 Total sales for the year topped 30,000 for the first time since 2007, and were 10.6% higher than the total for 2014.  The outlook for 2016 is for continued sales growth, as improving economic conditions and an ongoing environment of relatively low mortgage rates continues (for now).