The latest state-level data on employment and unemployment were released today, covering January 2010.  We’re getting this monthly information a little bit later than usual because the Bureau of Labor Statistics took some additional time to go through the annual process of revising previously-published data using more complete information. 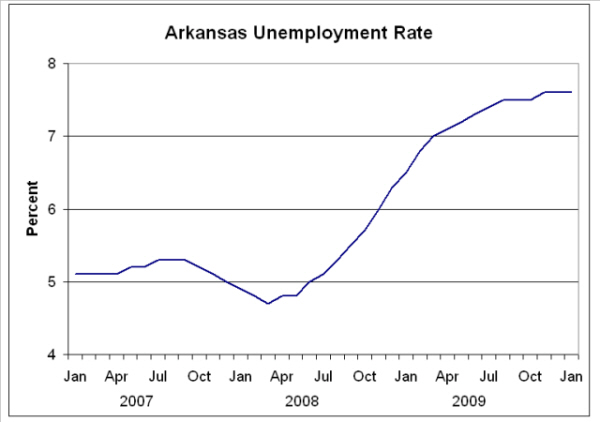 The payroll employment figures showed some signs of recovery in service-sector employment.  Total nonfarm payrolls increased by 1,700 jobs in January (seasonally adjusted) with increases in the categories of Financial Services, Professional and Business Services, Education and Health Services, Leisure and Hospitality, and Other Services.  We continue to see weakness in the goods-producing sectors.  Manufacturing employment had been up slightly toward the end of 2009, but was down by 1,900 jobs in January. 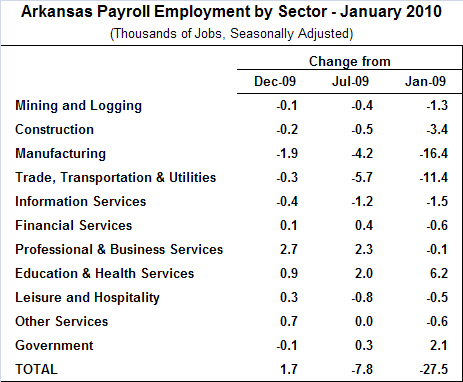 The payroll employment figures that were released this morning incorporated new benchmark revisions.  As reported on previous pages of the Arkansas Economist (here, here and here), the annual exercise of reconciling data from the Current Employment Statistics (CES) program with the Quarterly Census of Wages and Employment (QCEW) was expected to show sharply larger job-losses during 2009 than were previously recorded in the data.  This did, in fact, prove to be the case.  As shown in the figure below, the revised data show that payroll employment declined more sharply during 2008 and 2009 than was reported at the time, with previously unrecorded job losses accumulating to 18,200 by the end of the year (as of December). 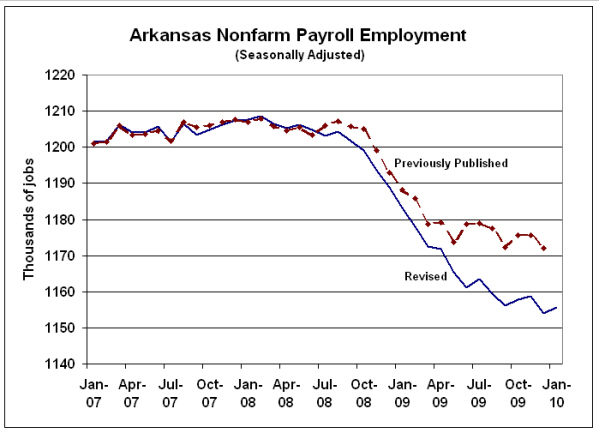 The fact that job losses during 2009 were greater than previously measured is–to some extent–old news.  However, it means that it will take longer to see employment increase to the levels we saw prior to the onset of recession.