Rising gasoline prices are in the news again.  According to AAA Fuel Gauge Report, the national average price for a gallon of regular grade gasoline has risen to $2.76 per gallon–up six cents in the past week and ten cents from a month ago.   Here in Arkansas we’ve seen similar price increases, with the current average price reported to be $2.66 per gallon.

Price changes play an important role in any market.  Gasoline prices tend receive more attention than other prices–perhaps because gasoline is a commodity that we use on a daily basis, or perhaps just because gasoline prices are prominently posted on every street corner.  But like any other price, understanding movements in the price of gasoline ultimately comes down to considering supply and demand.

About half the cost of gasoline can be traced back to crude oil prices.  In the past month, world oil prices have risen from around $70 to over $80 per barrel.  Specific market factors have been mentioned as playing a part in this increase:  On the supply side, an insurgency in Nigeria (an OPEC member nation) has been causing some production disruptions, and there has been some uncertainty about the prospects for Iranian oil production as well.   Meanwhile, it is anticipated that China will be adding to its strategic petroleum reserves this year, raising demand.  More fundamentally, the world economy is seen as recovering from the deep recession of the past two years, bringing stronger demand for energy overall.

Other factors affect the price of gasoline specifically.  With the warmer weather, refiners are switching to their summer formulations, contributing to a seasonal increase to production costs.  Demand for gasoline also tends to rise in the spring as consumers come out of hibernation to drive more.  This year, strengthening demand is expected to be particularly important.   With the economy emerging from recession and consumer spending showing signs of picking up, it is anticipated that demand for gasoline will be especially strong during the spring and summer months of 2010.

For both crude oil and refined gasoline, rising demand associated with economic recovery is seen as the fundamental factor driving prices upward.  Some industry analysts are predicting gasoline prices as high as $3.00 per gallon by this summer, but the alternative–lower gas prices in the face of weaker-than-expected consumer demand–is not an attractive prospect either.

In current market conditions, higher prices are serving as a signal to producers and distributors to unleash their inventories of oil and gasoline.  The time is now to bring the product to market.  In fact, the Financial Times reports  that the relationship between crude oil prices on the spot and futures markets is in the process of moving from “contango” toward “backwardation.”    The market has been in contango for some time, as weak demand during the recession has kept spot prices low relative to foward prices.  The market appears to be moving to a reversal, known as backwardation, in which forward prices fall below spot prices.  This serves as a signal for prompt delivery of product to market.  A similar process appears to be occuring in the markets for gasoline as well.

So in some sense, higher gasoline prices are serving as an indicator that the economy is strengthening, and should be considered a positive development.    For Arkansans, the other good news is that gasoline prices in our state remain about ten cents below the national average.  In fact, a “top ten list” of the lowest gas prices in the nation (see below) includes Arkansas, along with several of its neighboring states.  If you’re willing to pay one or two cents more for gasoline, Mississippi and Louisiana join the list as well.  So no matter which direction you head on a road trip from Arkansas this spring and summer, you’re likely to find relatively low gas prices. 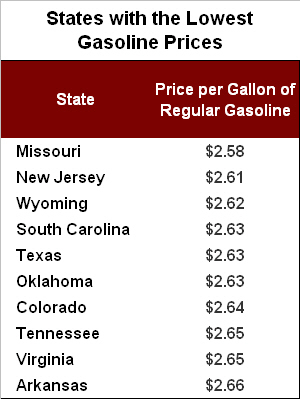