The unemployment rate for Arkansas ticked up by one-tenth of a percent in April to 5.7%.  According to recently revised historical data for the state’s  unemployment rate, it was the first uptick since January 2001.  It should not be too surprising to see a slight increase.  Now that the unemployment rate has fallen closer to sustainable long-run levels, it will become more common to see months where the unemployment rate remains unchanged or displays small (and statistically insignificant) ups and downs. 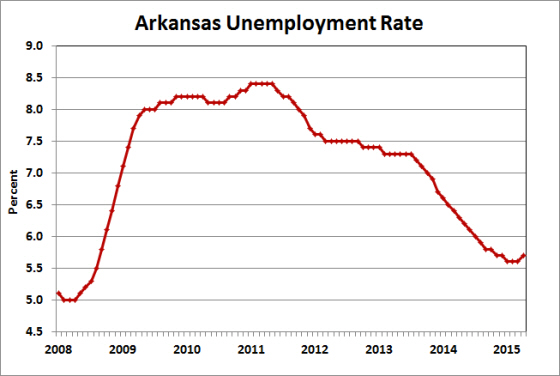 As shown in the figures below, this was the second consecutive month in which we’ve seen the number of unemployed increase — up approximately 1,500 in April after an increase of 900 in March.  On the other hand, it was also the 18th consecutive month in which the household survey indicated an increase in the number of employed Arkansans as well.  Since October 2013, the number of employed has increased by over 50,000.  The state’s labor force continues to expand — up by 4,000 in April and up by nearly 42,000 over the past 12 months. 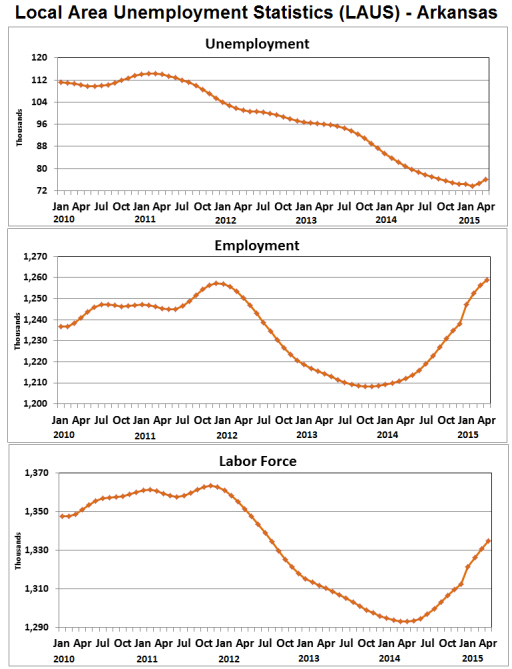 Payroll Employment
Data from the payroll survey also indicated a strong month of job growth, with nonfarm payroll employment expanding by 6,400 jobs in April.   However, much of the strength in April reflected a bounce-back from weather-related weakness in March.  For the first four months of the year, net employment growth has totaled only 4,200.  Novertheless, following strong gains in the second half of 2014, Arkansas employment in April was up 24,600 from the previous year. 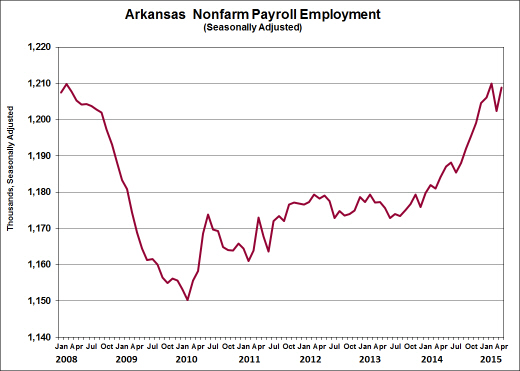 Reflecting the improvement in weather conditions, construction was the largest single contributor to the employment increase in April — up 2,400 for the month.  Education and Health Services also showed continued growth, with employment expanding by 1,700.  Increases were also notable in Retail Trade and Manufacturing.  Employment in Leisure and Hospitality services was down slightly for the month.  However, that sector continues to be one of the more rapidly-expanding areas of the economy, with a net gain of 15,600 jobs since the employment trough of February 2010. 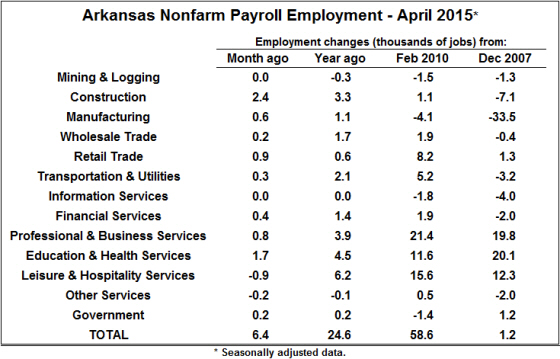