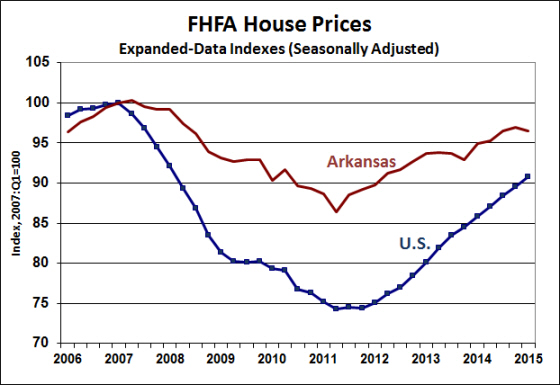 The Expanded data indexes are compiled using data from actual sales prices gathered from FannieMae, FreddieMac, FHA and County Property Recorder sources.  For metropolitan areas, FHFA publishes a set of “All-Transactions Indexes” that are based on actual sales prices along with appraisal values from refinancing.  As shown in the chart and table below, home prices in the various metro areas of Arkansas have displayed widely differing patterns.  Fayetteville and Memphis experienced price declines from 2007 to 2011 that were consistent with nationwide averages, but prices in both of those metro areas have shown significant recovery since then.  At the other extreme, prices in Texarkana, Jonesboro, Fort Smith and Little Rock showed little downward movement during the nationwide decline, and have experienced net positive appreciation since 2007. 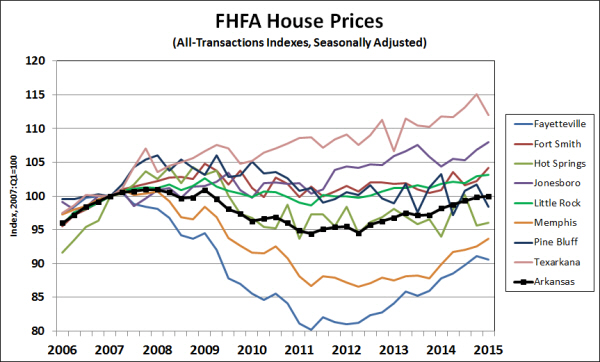 In the first quarter of 2015, home prices were higher in 5 of 8 metro areas, with declines in Fayetteville, Pine Bluff, and Texarkana.  Pine Bluff was the only metro area to have experienced a decline compared to the first quarter of 2014.  Over the 5 years since 2010:Q1, house prices have fallen 6.4% in Pine Bluff and 0.7% in Hot Springs, but are up in the state’s other metro areas.  The highest rate of appreciation has been in Jonesboro, where prices are 8.2% higher than they were five 5 years go. 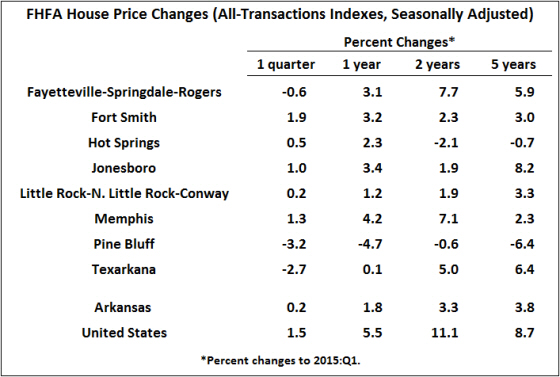