The Bureau of Economic Analysis launched a new data program yesterday, Personal Consumption Expenditures by State.   The new data set only covers the period through 2012, but it provides a source of new information about consumer spending at the state level that was unavailable before.

The chart below compares consumption growth rates for Arkansas and the U.S.   The data are not adjusted for inflation, so the growth rates reflect changes in both prices and quantities.  The data show that consumption spending in Arkansas slowed slightly more than the U.S. average during 2008 — the first year of the recession — but did not contract as sharply as U.S. consumption in 2009.  In the subsequent 3 years consumption grew at an average rate of 4.5% in Arkansas compared to 4.2% for the U.S. 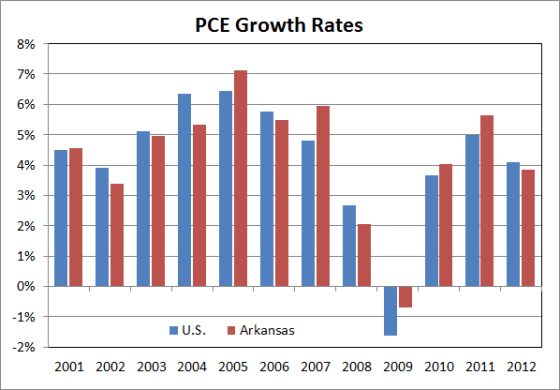 The per capita level of consumer spending in Arkansas in 2012 was $28,366, the second-lowest in the nation and approximately 80% of the U.S. level of $35,498.   This is a function of the relatively low level of income in Arkansas — consumption spending is ultimately constrained by disposable income.   Among categories of expenditure, the BEA press release noted that Arkansas was among the lowest per capita spending rates for housing and utilities, as well as for food and beverages.

The measure of consumer spending that we have relied upon here at the Arkansas Economist up to now, Arkansas Taxable Sales Including Gasoline (ATSIG), showed a sharper decline during 2009 than the new PCE measure, and its recovery has not been as robust in subsequent years.   ATSIG contracted by over 6% in 2009, and its growth averaged only 3.8% from 2010 through 2012.  There are several differences between the two that might help account for the discrepancies.  One difference ATSIG covers only items that are subject to sales tax.  Since many services are not taxable, ATSIG underrepresent the importance of spending on services in a household budget. This doesn’t seem to help explain the difference between ATSIG and PCE, however.   The data on PCE spending on services shows less variability than the goods component.

Three other differences might help explain:  First, Arkansas’ sales taxes apply not only to final consumption expenditures, but to many business-to-business transactions as well.  To the extent that inter-firm transactions have been suppressed by the relatively slow economic recovery, some of the weakness in ATSIG might be separate from trends in consumer spending.   The other two differences have to do with the location of spending.  The taxable sales measure necessarily focuses on spending that takes place in Arkansas, whether it is from Arkansas residents or not, whereas PCE measures spending by Arkansan’s, whether or not the spending takes place in-state.  A related issue is the proliferation of online shopping.  Internet commerce is growing rapidly, and to the extent that many internet purchases by Arkansan’s are not taxed by the seller, the state often does not collect the tax revenue, nor is it recognized in ATSIG.  So it seems likely that the relatively slow growth rate of ATSIG is related to some combination of slow business-to-business spending, lower spending in Arkansas by nonresidents, and more spending by Arkansans to internet vendors and other out-of-state sellers.