This morning, the Bureau of Labor Statistics (BLS) released its most recent data on employment and unemployment for Metropolitan Statistical Areas (MSAs). As described in a previous post, the MSA data are generally not seasonally adjusted. When it comes to comparing statistics from month to month, however, it can be important to adjust for regular seasonal patterns. The table below reports unemployment rates for Arkansas’ MSAs. It shows both the unadjusted data from BLS, as well as data that are seasonally adjusted using standard statistical techniques.

The seasonally adjusted data show that the unemployment rate remained constant from July to August in four of seven Arkansas MSAs. The unemployment rate fell slightly both in Jonesboro and in the Little Rock MSA. It rose by two-tenths of one percent in Texarkana. Unemployment rates around the state continue to be considerably higher than they were a year ago, but have remained fairly stable over the summer months. 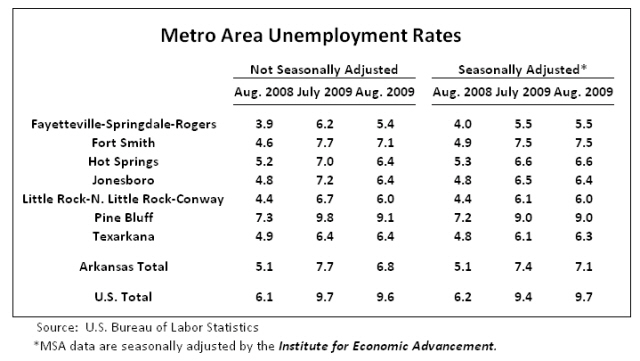 The data on nonfarm payroll employment for MSAs is similarly unadjusted for seasonal patterns. After seasonal adjustment, trends over time are more easily identifiable. The set of figures below illustrates the trends for Arkansas metro areas. As with the state-level data on employment, the data are characterized by three distinct sub-periods since the onset of the recession (particularly for the two largest MSAs – Little Rock and Fayetteville): From December 2007 until about October 2008, employment growth was slow, but with no large job losses evident. The largest job losses occurred during the period from October 2008 through March 2009. Since March, employment has remained fairly stable.

In some of the MSAs, the recession had no discernible effect at all: Jonesboro experienced steady job gains throughout the recession. In Pine Bluff, the recession didn’t have much of an impact on a steady decline in jobs. In both Fort Smith and Hot Springs, employment has rebounded over the past three months. In fact, both Hot Springs and Jonesboro had more jobs in August 2009 than they did at the start of the recession in December 2007 (seasonally adjusted). 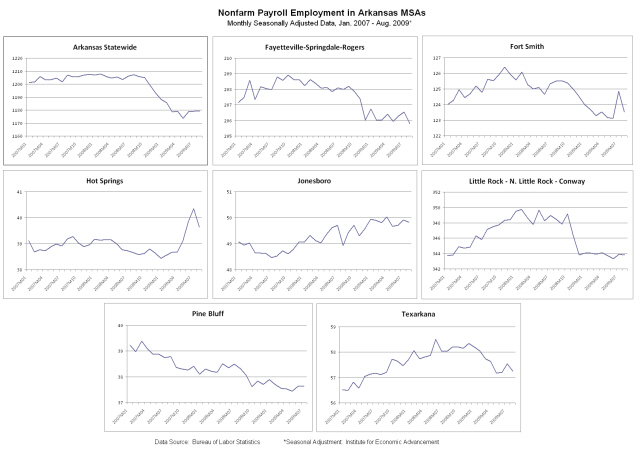 Click HERE to see a full size image of the figure above (PDF). 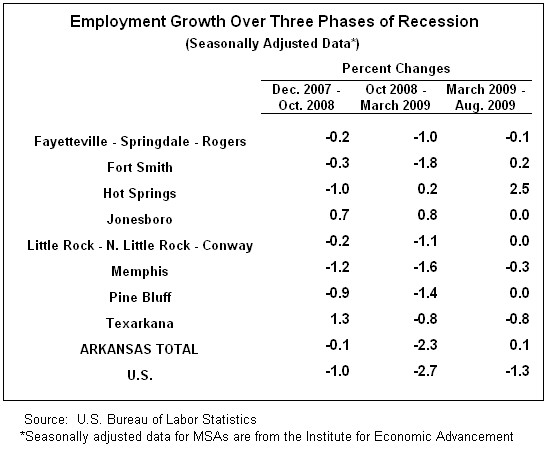 It’s too soon to say whether the upturn in job growth that we’re seeing in some of Arkansas metro areas reflects an incipient recovery from the recession. We will continue to monitor the data, looking for evidence of a broad-based, statewide upturn.