A new report on employment and unemployment in the nation’s metropolitan areas came out earlier this week.  It showed that unemployment rates were down from a year earlier in 345 of the 372 metro areas.  In Arkansas, the changes from a year ago ranged from -0.8% in Fort Smith to -1.7% in Pine Bluff. 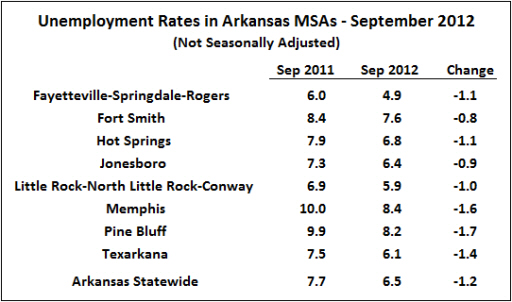 From August to September, the jobless rate fell 0.2% in Arkansas and 0.3% nationwide.  Arkansas’ metro areas generally saw declines for the month as well.  The smoothed seasonally adjusted estimates in the table below show lower rates in Hot Springs, Little Rock, Memphis, Pine Bluff, and Texarkana.  Unemployment rates were unchanged in Fayetteville and Jonesboro, but the rate ticked up 0.1% in Fort Smith. 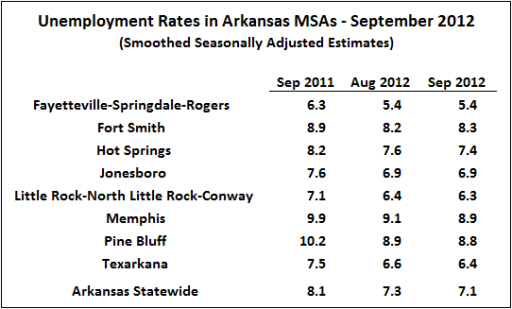 Payroll Employment
September figures on payroll employment suggest a weaker job-market picture than the results of the household survey.   Statewide employment was down 0.2% for the month, with both Fayetteville and Little Rock showing similar declines.  Employment dropped even more sharply in Texarkana, Pine Bluff and especially Jonesboro.  Fort Smith and Hot Springs, on the other hand, saw welcome improvement in the monthly employment figures. 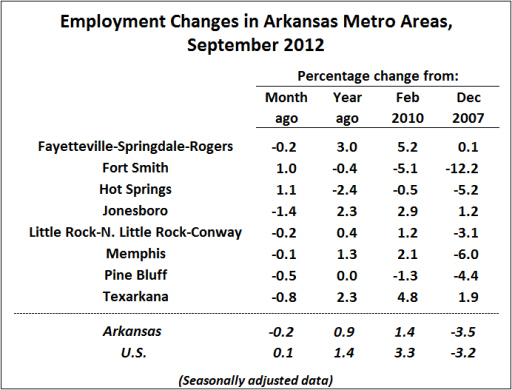 Since employment hit a statewide trough in February 2010, most of the state’s metro areas have seen at least a partial recovery from the sharp declines of the recession.  Three metro areas — Fayetteville, Jonesboro, and Texarkana — actually have higher employment levels now than at the onset of the recession.   In contrast, Hot Springs, Pine Bluff, and Fort Smith have all seen continued declines in employment since the February 2010 turning-point.

The metro area employment data are subject to the same benchmark revision process as the statewide totals.  Based on estimates of how the revisions will affect Arkansas employment in general, the data for metro area job growth are likely to see upward revisions, particularly for late 2011 and the first part of 2012.  We’ll be presenting some estimates of those expected effects in an upcoming post here on the Arkansas Economist.