The latest information on employment and unemployment for Arkansas Metropolitan Statistical Areas (MSAs) was released last week.   The data for January were mixed.  There were no clear signs of recovery in regional labor markets, but no further deterioration was evident either.  This is consistent with the statewide data reported in a previous post–showing the state’s unemployment rate unchanged with only a small increase in payroll employment.

As displayed in the table below, the household survey showed that changes in unemployment rates around the state were mixed.  The unemployment rate ticked up in the Fayetteville, Fort Smith, Hot Springs and Texarkana.  It was unchanged in Little Rock and declined in Jonesboro and Pine Bluff. 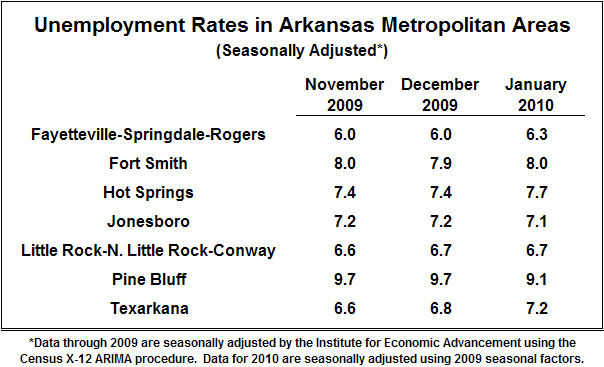 The drop in Pine Bluff’s unemployment rate was particularly sharp.  In recent years, Pine Bluff has experienced large swings in employment and unemployment from December to January.  The changes were smaller this year, resulting in a measured decline in the seasonally-adjusted unemployment rate.   We’ll have to wait and see whether this is just a statistical fluke or a significant change.

The January payroll survey also showed mixed changes in employment.  Seasonally adjusted, January payroll employment was up slightly from the previous month in Texarkana, unchanged in Jonesboro, and down a bit in the state’s other MSAs. 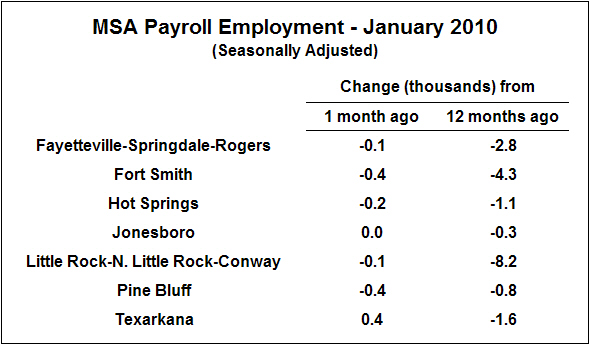 (Note:  Although we have seen no formal annoucement of the change, the BLS public database now provides seasonally adjusted payroll employment data for Arkansas MSAs.  Assuming that this practice continues, the Arkansas Economist will henceforth rely on these official seasonally adjusted series, rather than using data adjusted by the Institute for Economic Advancement.)

This data release also included the annual benchmark revisions that have been discussed extensively in recent posts on the Arkansas Economist (MSA revisions were discussed here).  As expected, the revised data show sharply greater job losses during the recession than were previously reported — for most of the state’s MSAs.  The revised data show that Jonesboro was the only metro area to show positive growth in 2008, and all of the states MSAs suffered employment losses during 2009.  The decline in Fort Smith was particularly steep. 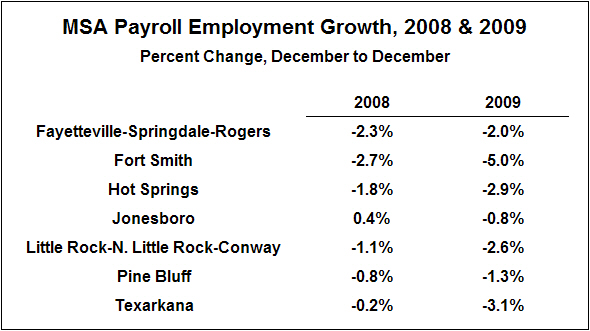 Although the revisions showed larger employment declines for most of Arkansas’ MSAs, the revised data for Pine Bluff show that job losses were not as large as previously reported.  In this case, it’s no fluke.  The updated statistics are based on very accurate data from the Quarterly Census of Wages and Employment (QCEW)  for 2008 and early 2009.

The anomolous upward revision to the payroll data for Pine Bluff was anticipated in a previous post on the Arkansas Economist.  A more complete evaluation of our exercise in “forecasting a revision of history” is forthcoming.