Not seasonally adjusted data from the household survey shows that unemployment in all of Arkansas metro areas remains below the levels of a year ago.  The press release from the Bureau of Labor Statistics reported that year-over-year declines were realized in 337 of the nations 387 metropolitan areas. 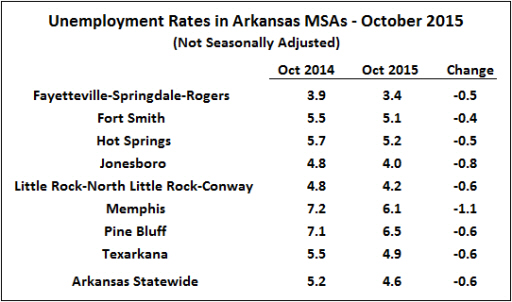 Month to month changes are typically influenced at this time of year by seasonal factors, with schools back in session and holiday temporary hiring starting to pick up.   The seasonally adjusted data show, however, there was little change in unemployment rates in Arkansas metro areas after accounting for these recurring seasonal factors.  Rates were unchanged in Fayetteville, Hot Springs, Little Rock and Pine Bluff.  Unemployment ticked up one tenth of a percent in Jonesboro and Texarkana, and down by one tenth in Fort Smith and Memphis. 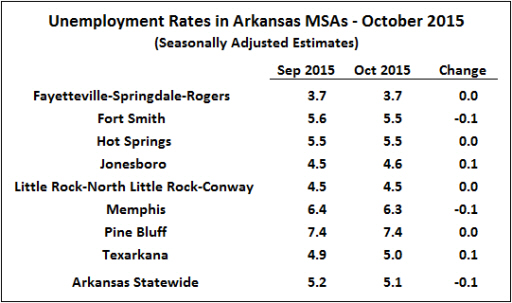 Payroll Employment
Changes in nonfarm payroll employment (seasonally adjusted) were mixed.  From September to October, employment was unchanged in Little Rock, up slightly in Fayetteville and Fort Smith, but down in the state’s other metro areas.  Compared to a year ago, employment was down significantly in Pine Bluff, but unchanged or higher in the other seven metro areas. 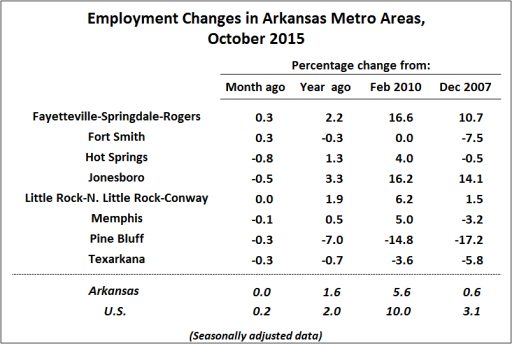