Metro Area Employment and Unemployment – May 2021

Statewide employment trends have shown a slow pace of recovery over the past three months, and the data for the state’s metropolitan areas generally reflect that 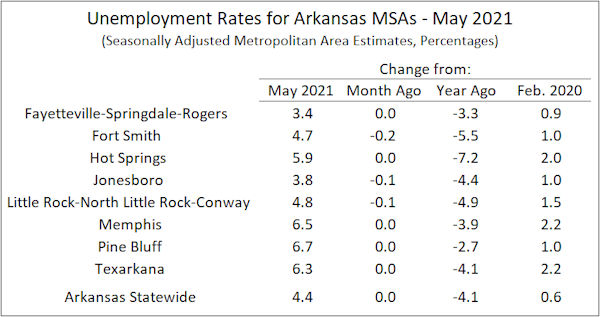 Compared to a year ago, unemployment rates have fallen significantly in all of Arkansas’ metro areas. Of course, that’s not surprising. The News Release from the Bureau of Labor Statistics reported “Unemployment rates were lower in May than a year earlier in all 389 metropolitan areas” across the United States. The relative magnitudes of the changes largely reflect the initial impacts of COVID-19 driving unemployment rates higher a year ago. For example, Hot Springs experienced the largest spike in unemployment last spring and has shown the largest decline since then. Unemployment rates remain one to two percentage points higher than in the pre-pandemic month of February 2020. The fact that the statewide rate has fallen to within 0.6 percentage points of it’s February 2020 rate suggests that the non-metropolitan areas of the state have recovered more fully.

Payroll Employment
Nonfarm payroll employment was up 0.3% statewide in May (seasonally adjusted), but metro area estimates varied considerably. Employment in Jonesboro and Texarkana surged by 1.7% and 1.3%, respectively; and payrolls also expanded in Fayetteville, Hot Springs and Memphis. Employment declined for the month in Little Rock and Pine Bluff, and was unchanged in Fort Smith. Compared to February 2020, employment is down across all metro areas, with the net declines ranging from -0.5% in Northwest Arkansas to -4.0% in Central Arkansas. 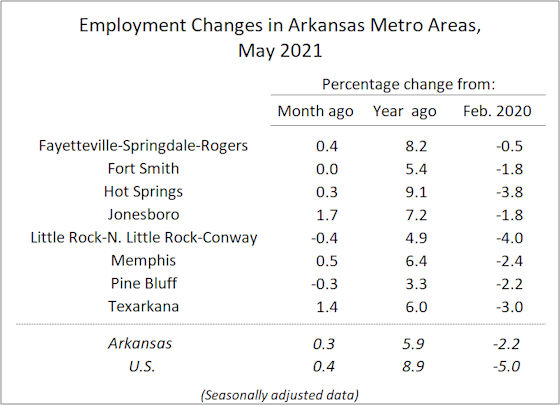