Metro Area Employment and Unemployment – May 2018

Unemployment rates in Arkansas metro areas were essentially unchanged in May, rising slightly in Fort Smith, Little Rock and Memphis and declining in Hot Springs and Pine Bluff (seasonally adjusted data).  Rates have changed little over the past year, with the largest 12-month increase being Pine Bluff’s 0.4% rise and the largest decline being -0.3% in Memphis.  The prevailing pattern across the various metro areas shows that Fayetteville, Jonesboro and Little Rock have unemployment rates below the statewide average with the other five metros above average.  The highest rate in the state is Pine Bluff at 5.1%. 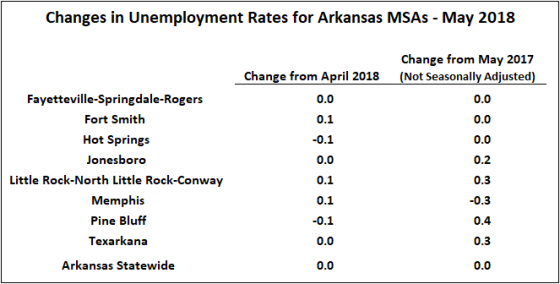 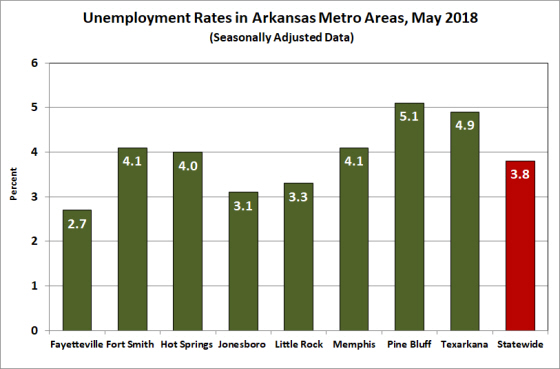 Payroll Employment
Nonfarm payroll employment increased in seven of the eight metro areas covering parts of Arkansas in May, with the only exception being a small (-0.1%) decline in Fort Smith.  Northwest Arkansas led the pack with a monthly increase of 0.6% — a pace that corresponds to a 7.7% annual rate!  Jonesboro, Little Rock and Pine Bluff all registered substantial gains as well.  Compared to a year ago, only Fort Smith and Pine Bluff have shown small (and insignificant) declines, with employment up in all other metro areas.  Nevertheless, compared to the level of employment prior to the 2008-09 recession, only four of the eight metro areas have seen net  gains:  Employment remains below the levels recorded in December 2007 in Fort Smith, Hot Springs, Pine Bluff and Texarkana. 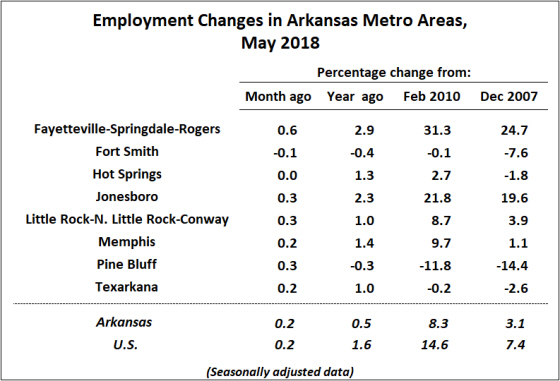