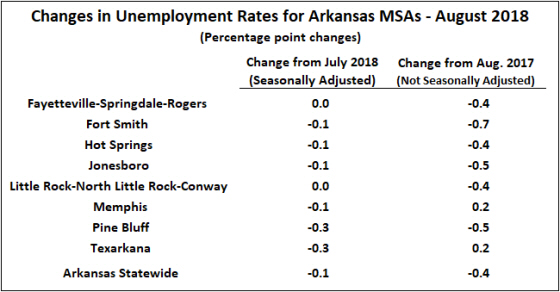 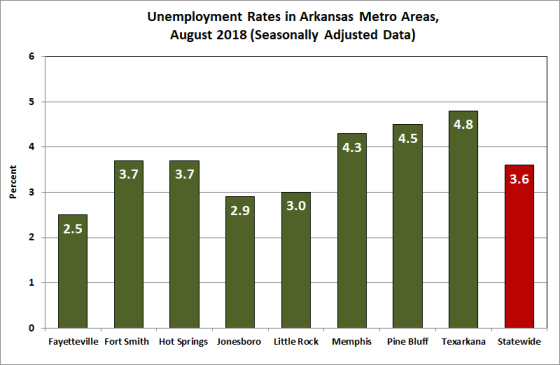 Payroll Employment
Nonfarm payroll employment was down slightly on a statewide basis in August, but changes among metro areas were mixed.  Fayetteville, Fort Smith, Jonesboro and Memphis registered slight gains, while Hot Springs and Little Rock saw employment declines.  Pine Bluff and Texarkana were unchanged.  Over the past year, employment has been unchanged or down slightly in Fort Smith, Hot Springs and Pine Bluff.  All other metro areas have seen net increases, with the magnitude of gains particularly notable in Fayetteville, Jonesboro, and Memphis. 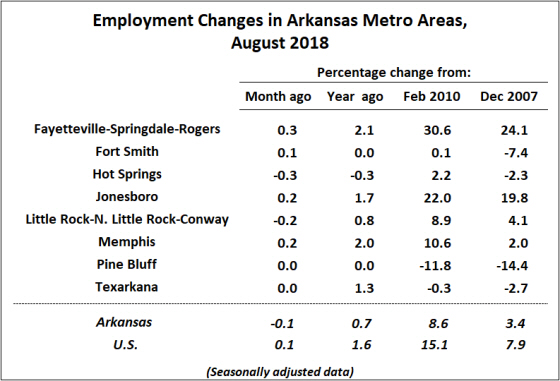 Household vs. Payroll Employment
In the context of the statewide numbers, we have noted that the measures of employment estimated from the household survey have been growing at a significantly slower pace than the payroll employment figures.  Over the most recent six months, the household survey (used to calculate the unemployment rate) has declined by 0.3% statewide, while the payroll survey is showing an employment increase of 0.6%.  As shown in the table below, this discrepancy carries over to several of the state’s metro areas.  The differences are largest in Fort Smith, Hot Springs and Texarkana.  Although both sets of employment estimates will be revised early next year, the payroll survey is generally considered to be the more accurate of the two.  Consequently, employment conditions in the state’s metro areas are better expressed in the recent statistics on payroll employment, and the household data (including unemployment rates) are more likely to be revised in those metro areas where the discrepancies are the largest. 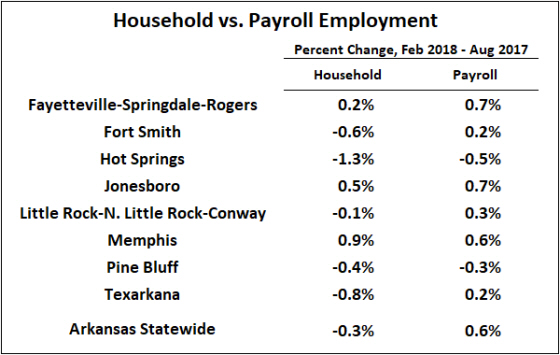