Recent data on sales tax collections from the Arkansas Department of Finance and Administration (DFA) show that taxable sales growth stalled at the end of 2010.  After adjusting for the timing of tax collections, changes in tax law, and recurring seasonal fluctuations, the latest tax collection data show that Arkansas Taxable Sales declined by 0.7%  in the fourth quarter of 2010.*   After revision of seasonal factors, the fourth-quarter decline almost exactly offsets a gain of 0.7% seen in the third quarter.  For 2010 as a whole, total taxable sales were up 4.2 from the previous year. 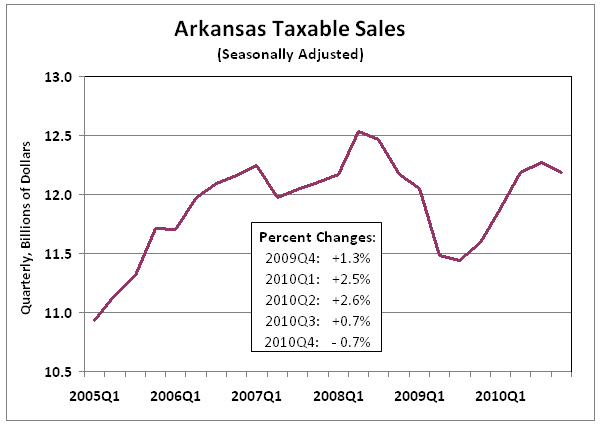 Sources: Department of Finance and Administration, Institute for Economic Advancement

The fourth quarter decline was primarily attributable to a sharp drop-off in December.  DFA reports sales tax collections as of the month they are received by the state — generally after a one month lag.   Consequently, the decline in December sales corresponds to sales tax receipts for January, as reported by DFA yesterday.  The DFA monthly general revenue report noted the decline, citing a 3.1 percent decline in gross receipts collections that resulted in a total that was 4.9 percent below forecast.   The holiday shopping season is usually associated with a surge in December sales, so the process of seasonally-adjusting the data reinforces the unusual nature of the decline at the end of 2010. 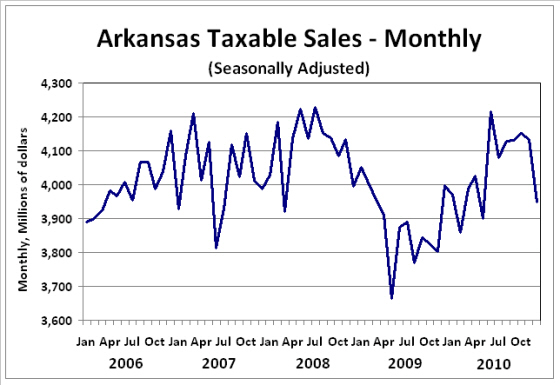 Sources: Department of Finance and Administration, Institute for Economic Advancement

The weak sales growth in December is surprising given anecdotal information about the relative strength of the holiday shopping season.  It is possible that the source of the weakness is in non-retail areas of sales and use tax collections.  For instance, tax collections from utilities might have been low due to relatively favorable weather and low energy costs.  It might also be the case that holiday shoppers spent more money on online purchases, for which sales and use tax collection is not always complete.  However, there is really no solid evidence available to explain the downturn.

The fourth quarter decline in Arkansas Taxable Sales is surprising — and disconcerting.  However, we should be cautious about putting too much emphasis on a single monthly data observation.  We’ll just have to wait and see how the numbers come in for the first few months of 2011 before concluding that the December number represented either a change in trend or an anomaly.

The Arkansas Taxable Sales series is calculated by IEA to serve as a timely measure of Arkansas retail sales.  The series is derived from sales and use tax data from DFA, adjusting for the relative timing of tax collections and underlying sales, changes in tax laws, and seasonal patterns in the data.

A spreadsheet of the most recent data is available here:  Arkansas Taxable Sales data (Excel file)