New figures from the U.S. Bureau of Economic Analysis show that total personal income in Arkansas declined slightly in the third quarter, down $57 million or 0. 06%.  In addition, data for the first two quarters of 2011 were revised downward.  Previously-released data showed growth rates of 1.4% and 1.3% in the first two quarters of the year, while the new data show growth of only 0.9% and 0.7%.

Nationwide, personal income growth slowed considerably in the third quarter, growing at only 0.1%.  This represents a sharp deceleration from the 1.3% pace of the previous four quarters.  The chart below shows the growth slowdown for the U.S., and illustrates that income growth in Arkansas has been slowing relative to the national average over the past year.  As of the third quarter, total personal income for both Arkansas and the U.S. are 3.1% higher than the previous peak (in the second quarter of 2008). 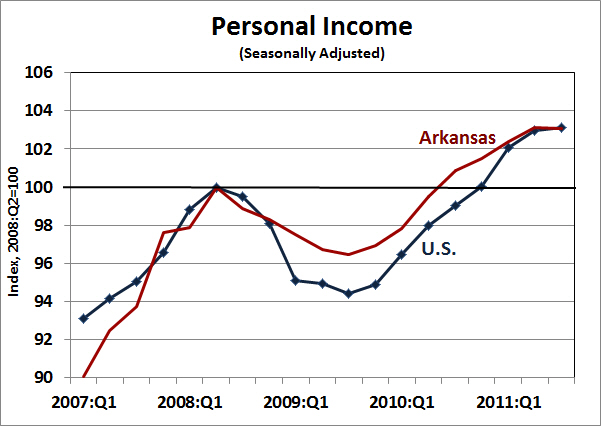 Many of the important components of Arkansas personal income were positive, although the magnitude of the changes were very small.  Nonfarm income was up slightly (+$ 25 million or 0.02%), while the overall downturn was concentrated in farm income, which was down $81 million — a 12.5% drop from the previous quarter.  The decline in farm income was, in turn, concentrated in proprietors’ income, which was down $84 million or 24.3%.

The only other components of Arkansas income that contracted in the third quarter was personal current transfer receipts.  This component, which includes all sources of transfer payments to individuals from government entities, was down by $141 million, or 0.6%.  As discussed in previous posts, transfer payments tend to provide temporary support for incomes during economic downturns, so a measure of total income that excludes transfers provides a better indication of the underlying growth of the private-sector economy.  The chart below compares Personal Income Less Transfer Payments for the U.S. and Arkansas.  By this measure, the relative slowdown in growth for Arkansas is even more pronounced. 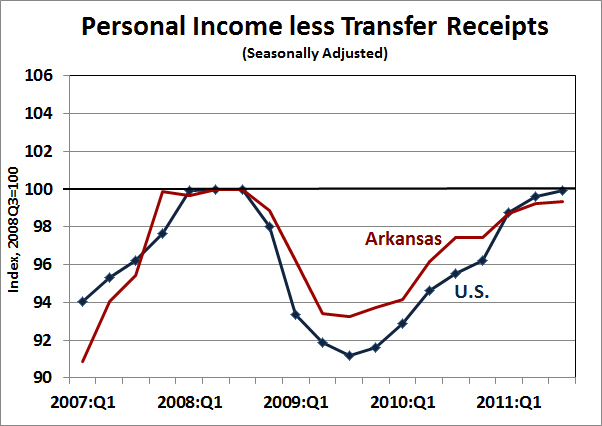 Given the weak performance of Arkansas’ labor markets this year, it is not surprising that personal income growth has lagged behind the rest of the nation.  When it comes to potential drivers of this slowdown, the extraordinary weather events of 2011 are a likely culprit.  The tornados and floods in the spring, followed by the summer drought, had measurable impacts on Arkansas agricultural sector.  The good news is that weather is a temporary factor:  This year’s weakness in agricultural incomes (along with their ripple-effects on the rest of the Arkansas economy) are unlikely to have lasting effects on income growth.